Three Minute Review: Saikin on May

The Experiments: A Legend in Pictures and Words by Rachel May (Dusie, 2015) 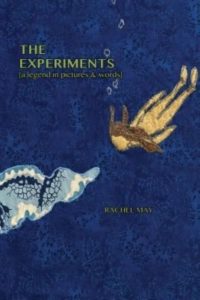 If you planted this book in the ground, what would grow?

Pokeweed. Pokeweed berries have been used to make ink and fabric dye for centuries. Like May’s flash fiction, they are humble in origin but produce rich colors. I imagine if you dug up the book again, the pages would be vampire purple.

What book is this book’s frenemy?

Roland Barthes, Image, Music, Text (1977). May infuses her work with philosophical musings, but in a playful, haunting way. I would be hard-pressed to say whether the end result works toward or against Bathes’s theoretical interrogation of the interplay between language and pictures.

What dance would this book do?

The Jitterbug. Funky and a little awkward to watch, but crazy fun to do. The illustrations pick you up and throw you around, leaving the reader a bit dizzy and breathless and wanting to do it all over again.

“When visitors come by, they’d say it was all about perception, and how you saw yourself and on and on like this, but the ones who lived there felt the hole and knew it was a hole, and that no talking around it could make it feel less empty, Who would want a talking armadillo?” (p. 37)

And we said, “Now you have really stumped us. We weren’t ready for a discussion of philosophy. We underestimated you.” (p. 50)

“He erases what he made twenty years ago, and then layers on other things. He is layering and unlayering to find what he knew then.” (p. 70)

Anna Saikin‘s stories have appeared in Potomac Review, Per Contra, Pretty Owl Poetry, Gravel, Vinyl, and elsewhere. She is currently working on a novel set in 1930s San Francisco. You can find her on Twitter @AnnaSaikin.