At a Dinner Party for White (Wo)men

[T]he other plates are creatively imagined vaginas…The Sojourner Truth plate is the only one in the collection that shows—instead of a vagina—a face.

Everyone else is invited to meet their vaginas—

except me, the magical negress.  My box

always absent because desire is not a privilege

we, still, their dark continent.

They cannot imagine my yawning labia

because I do not pink at their touch,

cannot imagine me wet when I want to be,

decidedly igniting follicles on my body.

At best, undressed, I am invisible, neutered, neutral—

with archetypical depictions of tears and rage—

a place at the table they refuse to learn to set. 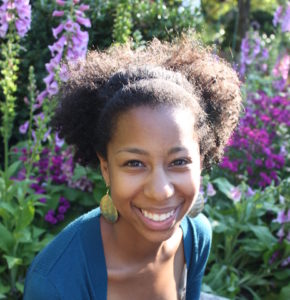 Chet’la Sebree was the 2014-2016 Stadler Fellow at Bucknell University’s Stadler Center for Poetry. She holds an MFA from American University and has received fellowships from The MacDowell Colony, Yaddo, Hedgebrook, and Vermont Studio Center. Her work has recently appeared or is forthcoming in Kenyon Review, Crazyhorse, Guernica, and Gulf Coast.