Self Portrait as The Other Girl

in the high grass of a winter field. Girl with her fist in her mouth,

gnawing her knuckles to mica. Girl as a a music box whistling weird lullabies,

a well waiting to be filled with water, a safe place for rabbits to be born.

Girl buried in snow. Girl carried off by bats. Girl as a sail with the wind let out

lain down like a starched white sheet. Girl as a bell the storm is ringing over

and over again. There is no good way to talk about pain, how it means

you are only ever kissing the image of someone’s face in a pond, hearing their

where you were born weighing less than two hundred nickels, too small

for your father’s hand. Girl split down the middle and re-sewn. Girl pulling

stitches from the backs of her legs. Girl bleeding into plaster. Girl who cannot

kneel in church. Girl tearing herself apart. No, no, Girl as a floating piano.

Girl as a blue clam boat. Girl as a dove you can carry in your mouth without

causing a bruise. Girl as the feather couched in your cheek. Girl as a small fire.

Girl as just another heartbeat. Girl who will not call one more awful thing into the world. 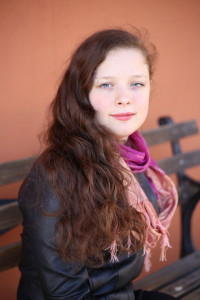 Molly McCully Brown is the author of The Virginia State Colony For Epileptics and Feebleminded (Persea Books, 2017), which won the 2016 Lexi Rudnitsky First Book Prize. Her poems and essays have appeared or are forthcoming in Gulf Coast, Crazyhorse, Ninth Letter, Pleiades, Colorado Review, and elsewhere. She lives and works in Little Rock, Arkansas, where she is the inaugural Jeff Baskin Writers Fellow at The Oxford American magazine.