Brian Clifton co-edits Bear Review. His poems can be found in: Whiskey Island, Pleiades, Southeast Review, CutBank, Portland Review, The Pinch, and other magazines. He holds an MFA in creative writing from the University of Missouri – Kansas City, where he was awarded the Durwood Fellowhsip in poetry. His poems, “The Small Wife”& “Sometimes My Phone Doesn’t Ring” will be published in the upcoming issue of Pleiades, #36.1. 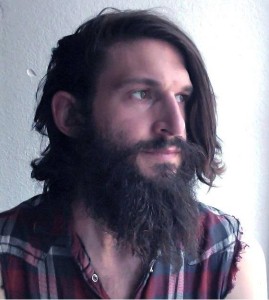 We recently sat down with up-and-coming writer Brian Clifton. Also included (at the bottom of this post) is a preview of one of his poems, “The Small Wife”,  from our upcoming issue. Enjoy!

P: Mr. Clifton — thanks for taking the time to chat with us.

B: I would just like to say thanks for doing this! I’ve been a fan of Pleiades since I learned about literary magazines, so this is sort of a dream come true.

P: You are very welcome! Now, let’s dive right into this thing. “The Small Wife” is going to be featured along with this interview — a sneak peak at one of your poems. It has an interesting backstory, if I’m not mistaken?

B: Yeah, “The Small Wife” happened mostly because I had writer’s block. At the time, I had recently reread Heather Christle’s “What Is Amazing.” The whole book has this unbelievable tone that combines sadness and playfulness. So I had the book on my desk and flipped it open to “Small Husband” and decided to write a response to it.

I picked a few words from Christle’s poem and tried to keep the balance of danger and absurdity. I wanted to write a poem that had a different feel on the page than when read aloud, so I tried to use line breaks to break the speaker’s syntax and show something like the threat of aggression. Like, “about all my desires/ for her to be no longer”.

B: When I sit down to write a poem, I purposefully don’t think about interpretation. I just want a bunch of weird stuff to happen in a poem, because it can. I remember reading Plato–when he’s talking about going to playwrights to ask the meaning of their plays and being disappointed because they always get it wrong. That idea stuck with me. Once a poem is out in the world, it’s out of my hands, so to speak.

I find when the weird stuff comes natural, when it feels natural, I’m getting at something good, “The Small Wife” is one of those poems where the moments in it happened and felt “right.”

P: Let’s talk Bear Review. (Readers can access the BR website at: www.bearreview.com ) You started this small literary magazine with just one or two friends, correct? How did it all come about?

B: Bear Review came about from a few discussions I was having. One day, my friend Marcus Myers said he had a dream of starting a press, then a few days later a classmate of mine, Jon Miller, and I were hiking around and talking about starting a magazine. They didn’t know each other but we all got into contact and started Bear Review.

Jon had to drop from the magazine–he left to teach English in China. But Marcus and I kept it going. I can’t speak for Marcus or Jon, but originally, I wanted to give back to a community that had given me so much. I wanted to publish people who had never been published alongside my literary heroes. I also, selfishly, wanted to see how the other side of submittable works–what things to do and what to avoid.

P: What sort of things did you learn (and continue to learn) while working as the editor for your own magazine? Were there any interesting aspects that stood out to you or observations that were helpful to you: a writer who submits to the same types of magazines?

B: Good question: like I used to think providing a “quirky” bio was great, but after seeing the same type of quirky bio 100s of times, I backed down to the generic, but that’s just me, some people can (and have) pulled it off. I’m just not that funny. I also saw that adhering to a magazine’s guidelines is the best way to get on an editor’s good side, that and sending great work.\

Something else that surprised me was how many good pieces we would get that just didn’t fit the issue/the magazine as a whole. It made me feel better about the rejections I was getting, and made me more interested in researching magazines’ aesthetics.

P: Could you talk more in-depth about the magazine itself? Here’s a couple quick queries:

Does the magazine’s name have an origin? — Do you & Marcus have an office or a designated work space, or is it more of a versatile, on-the-go work environment?

B: The name has an interesting origin. Marcus and I have beards. Jon had long hair. We kind of wanted to play off our grizzly appearances while showing we wanted “strong as a bear” pieces. As soon as we chose Bear review, I said, jokingly, “People are probably going to think this is a gay magazine.” Like playing off the burly gay man stereotype. But two weeks later, we got a message asking us to participate in the “Celebration of Gay and Queer Lit Festival.” We were super flattered but felt we needed to tell them we weren’t specifically gay themed but would love to particpate/support in anyway we could.

I also found that Bear Review was blocked on the KC public library computers because they classified it as pornography.

P: Wow! It’s interesting the conclusions some will jump to based solely on a title. It’s a bit funny! Go on– where does Bear Review happen?

B: As far as the work environment, we have a de facto office space–Marcus’ dining room. But we both can log into submittable anywhere. Whenever we meet, it’s there. We try to keep tabs on all the writers’ we published so we can post about their successes. Any time a writer wants to alert us to a publication or a book or an interview, we try to post it. Obviously we like the writing we publish, so we want to introduce the writer’s work to a wide range of people.

P: Do you receive international submissions as well?

B: Yes! We get international submissions from Canadian and South American writers mostly, but we’ve had submissions from Africa, Europe, India, South Asia, and the Middle East as well. It’s really cool to see what other cultures are doing in poetry and how people who’ve learned English as a 2nd or 3rd language use it to subvert the cliches we’ve come not to see ourselves.

P: That’s great. We’ll wrap this up here shortly. What are your aspirations, Brian? Are you hoping to burgeon the popularity of your magazine? Would you like to eventually pass the torch and just focus on writing?

And do you have any advice for young writers?

B: As a writer, in 5-10 years, I’d like to have a book out and a PhD. (I’m currently applying to a few programs, so my fingers are crossed), and maybe teach a few college classes. My creative writing and literature professors have had such an influence on how I think and see the world (I truly would be lost without them) that I want to pass that along.

As far as advice for young writers, beyond read widely and write often–which is really the only way to be a better writer, I would say don’t be ashamed of who you are or what your writing is like. I had a mentor tell me that you can drive yourself mad trying to be a part of an aesthetic that you just don’t fit into. The world needs the Douglas Kearneys AND the Eduardo C. Corrals, the Li-Young Lees AND the Tracy Morrises, the Simone Muenches AND the Gabby Besses. The literary community is wide, and every camp in it is doing something worthwhile. Don’t ever feel you have to conform to a certain aesthetic to be “good” or “literary.”

And this goes beyond writing. Find the small magazines/presses that publish work that takes the top of your head off. Subscribe to them. Support them. Submit to them. Chances are you’ll get an acceptance, and chances are that acceptance will mean so much more than one from a magazine that doesn’t excite you. Message the writers you find in these magazines–tell them you enjoy their work. I’ve met some great people this way. We’ve exchanged work and discussed books. We’ve been each other’s moral support when our inboxes are full of rejections, and we’ve helped celebrate each other’s successes.

P: Thank you for your time, Brian! It’s been a privilege. Best of luck on your future endeavors.

B: No problem. Definitely a lot of fun.

I could talk to my wife

if my wife weren’t so

small and she is

If she isn’t tired

then I’m not tired

I want to talk to my wife

about all my desires

for her to be no longer

small but her little

radio is too loud

as she does aerobics

I watch my wife

our daughter our son

in the coils of her arms