Three Minutes with The Story of Ash by Gerry LaFemina (Anhinga Press, 2018) 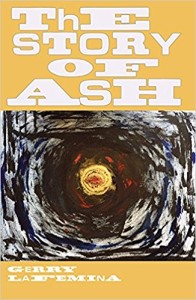 1)  If you planted this book in the ground, what would grow?

Irises, potatoes, basil, citrus trees— anything helped by the addition of wood ash to the soil to keep roots healthy, to help repel threats like slugs or rot, and to encourage it to come back stronger next growing season.

This book leans toward our ideal version of something or someone—whether a life partner, a family, a city block, even America—and the ways in which we’re constantly losing and letting go of that vision, both collectively and on a deeply personal level. The speaker sits in the ashes of aftermath in many of these stanzas. They confess, but then hope, and there are glimpses of possible transformation in almost every poem. In “Greenwich Village,” we witness a “junkie drag queen vamping for change” and an old woman who offers the man a cigarette:
Wait, he said, before she turned, & he reached

for the Asiatic daylilies along the fence. He
placed one blue bloom in her hair & one, too

in his. Now we’re both beautiful. Like dragons
they breathed out smoke in the July heat.
2) What snack should you have while reading this book?

There’s beauty sewn into this collection, but it’s usually glinting in the midst of destructions, both large and small, sometimes startling and sometimes soft. Themes of desire, addiction, and redemption are critical to its overall arc. And at least we’re in versions of these themes together, LaFemina’s poems sometimes remind us:

In the alley all evidence suggests a stray: the shredded bag,
thin bones of yesterday’s chicken
strewn along the street—another animal stricken
with hunger. I reckon it could be any of us. (“On the Remains of a Fire at West End Park”)

3) What is this book’s theme song?

“It’s the End of the World As We Know It” by R.E.M.
“Perhaps, then, we’re defined by what we refuse to forget,” says the speaker in “The Story of Ash.” LaFemina’s collection gives us a tour of what can be burned away, even if only temporarily (cigarette after cigarette, wasp nests under the eaves, loneliness, even homes and relationships). To have one of your first big crushes on a girl whose father’s obsessed with surviving “the bomb.” To stop your car so you can rescue an angry snapping turtle. To gift a melancholy nun with roses, meant for a date gone wrong. These are some of the stories in this book that become tiny lights waving, asking, Smell something burning? I’m still here.

Becca J.R. Lachman is a writer, public library communications officer, and recovering former adjunct professor in Athens County, Ohio. Editor of A Ritual to Read Together: Poems in Conversation with William Stafford (Woodley Press), she’s also the author of two poetry collections: Other Acreage (Gold Wake Press) about saving her family’s 1840s farm and The Apple Speaks (Cascadia Publishing House), which explores her parents’ time as Mennonite missionaries in Liberia.

Previous post
What Is Craft and What Does It Do, Part 2
Next post
3-Minute Book Review: Leah Miranda Hughes on Erin Adair-Hodges