Solarpunk: Here’s My Crew, an interview with Alexander Weinstein 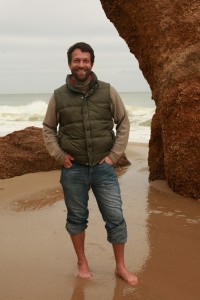 Solarpunk: Here’s My Crew
an interview with Alexander Weinstein

Tom Cassauwers: Do you know solarpunk, and if yes, what is your opinion on it?

Alexander Weinstein: When I first heard about about Solarpunk, I thought: Yes, here’s my crew! Because for a while now I’ve been talking about the utopian story, and stories based on the central mechanism of joy and awe.  How do we create the kind of future which we want to see in our fiction, rather than presenting the one we want to escape?  And I was unaware, until recently, that this genre even existed. But really, I only know about it as I haven’t read a great deal of it yet. I’m looking forward to digging in to get a sense of its scope, what the genre entails, how broad its reach is, and what genres/styles are welcome within its umbrella. What excites me is that it’s so new and fresh that it feels like its parameters are being created as we speak.

Solarpunk presents a utopian rather than dystopian view of the future, one wherein we’ve harnessed green energy and solar/wind power, and the capitalist, conservative, and religious-zealot overlords (who cause so much disaster presently) have been dismantled due to a growing sense of inclusion, compassion, environmentalism, gender fluidity, sex-positivity, etc. I’m all for this kind of speculative imagining—I think we need to dream fictions of a better world in order to be able to inhabit them. When this utopianism is combined with climate fiction, it’s a really wonderful opportunity for writers to explore our human future in an optimistic way, one that gives us hope and a future to work toward as a community.

One of the questions I have is how exclusive the genre will be?  For example, there seems to be a pull in some circles toward specific aesthetics: such as the visual aesthetics of art nouveau in its architecture, clothing, and settings, and there seems to be a call for actual working/green solutions which are scientifically-based (a harder sci-fi). If this is the case, such parameters can make Solarpunk a more exclusive terrain, keeping many works out of the canon. There is a history of this within cyberpunk and steampunk communities that cultivate particular aesthetic tropes and time-period constraints. What’s your sense of this—is Solarpunk cultivating a specialized aesthetic or is it open terrain?  And where are the lines drawn?  For example, if we were to envision a world which looks like ours but wherein we gain psychic communication and an expanded sense of love for one another (but there’s no green technology present only spiritual awakening) would this fall within the Solarpunk genre?

TC: From talking to people in solarpunk I indeed get the feeling that the aesthetic part is quite important to it. Although you of course touch on the problem of how to delineate genres, which in the case of a starting one such as solarpunk is especially difficult. But I do get the feeling the aesthetic has particular importance to people in the space, but some might disagree.

AW: This discussion will be interesting to watch unfold.  The example I give, of the psychic communication, may place such a story outside the realm of Solarpunk and beneath a larger umbrella of Utopian fiction, and maybe this is the larger designation that we should work toward as a writing community.  I mention this because Solarpunk’s larger critique of cynicism and nihilism is one which is an important issue to raise, not just in sci-fi circles but in the literary community at large. The problem with niche Solarpunk aesthetics is that they can potentially separate its mission from actually engaging in larger literary circles. Steampunk, for example, is incredible—but it has been marooned by the literary community to con-festivals and distant bookshelves.  And I think this often has to do with its pre-determined aesthetics.  The same goes for really any “hard” genre such as detective, or high fantasy, even sci-fi. My feeling is that Solarpunk has the potential of going in a much broader direction, particularly because of its inclusive ethos—it wants to welcome non-binaries. My feeling is that the movement is early enough to be malleable in a way that can let it become a much larger category—transforming Solarpunk into a wider genre like what has happened with “magical realism” or “speculative fiction.”

TC: Why did you write Children of the New World in a dystopian setting?

AW: Well, it has been a pretty dystopian time.  The collection was written over 10 years, which included the Bush years—which at the time was as dystopian as I could imagine things could get (how quaint, I realize, now that we’re in the Trump years). Fracking was making tap-water flammable, banks along with help from our government were robbing people of their houses, the BP oil spill was spewing crude oil daily into the ocean, coal companies were blasting apart Appalachia, and on and on and on.  So I wanted to speak to this destructive, consumerist world we’re living in, and show the present dystopia it is creating.  In this way, the work is a kind of realism. I was also concerned about how we, as a global culture, have embraced narcissistic technology through our use of smart phones, online dating, the constant emailing and updating of our profiles, and most recently our departure into virtual reality.  I saw a kind of escapism happening here which was leading to an interpersonal dystopia, one wherein human connection is being traded on a daily basis for online connection, real communities for virtual communities.  All of this led to a fertile terrain of fictional landscapes. Yet, while the stories in Children of the New World are dystopian, they have deep hope and compassion within them.  In nearly all of my stories, there’s hope for the endurance of human love, empathy, and connection, and many of my characters find that it’s the dystopian landscape which has forced them to seek a return to what it means to be human.

TC: Do you prefer utopian or dystopian settings for sci-fi novels?

AW: I simply haven’t read enough utopian fiction or sci-fi to really know yet, but my guess is that I probably tack towards utopian.  Some of my favorite fiction is fabulist/magical realist in nature. I love Italo Calvino’s landscapes in his collection Cosmicomics. The opening story, The Distance of the Moon is actually the kind of story I’d suggest should be in the Solarpunk genre (Though I suppose it’s pretty lunar!)  Here you have a kind of lighthearted and very planet-based fiction, one which also contains a deeply mystical quality about the planets. Similarly, I love the stories of Steven Millhauser, a writer who often plays with a near-steampunk aesthetic. Ludmilla Petrushevskaya writes simply gorgeous fairytales, and Tatyana Tolstaya writes realist stories with such a fantastical voice that they read like beautiful fables to me. That said, I enjoy dystopian stories/novels which explore the potential for human kindness and compassion while simultaneously calling out the overlords of our present corporate/political world.

TC: One of the critiques solarpunk levels against present-day sci-fi is that it is too dystopian, and thereby prevents people thinking about how to change society. Do you agree with that assessment?

AW: In large part, yes. I’ve been talking about this issue recently with other writers, which is that dystopian writing can often tack towards the cynical—so that if you really dig down into the cosmology of the novel/story what you find is moral nihilism at its core: a belief that, left to their own devices, humans will kill one another, and the good will be left to struggle against hordes of evildoers. This stance isn’t just present in sci-fi and dystopian writing; you can see it in realism as well.

For a while now I’ve looked at the overriding cynicism of our literature, art, music, and film. This really became a major aesthetic in the late 20th and early 21st century.  In literature, the more cynical and scathing you could be, the more you were king.  And amazing writers, such as Raymond Carver and David Foster Wallace, emerged with this tone.  However, at its heart there’s deep pessimism within such work, and I began to pull away from this. Where was the love for humanity, the belief that we could be better to one another and forge a more beautiful community? I found myself withdrawing from cynicism, even when it was clever or brilliant, and wanting to see writers who risked sentimentality, spirituality, and hope. For me, I found this in many of the fabulists and humorists. Similarly you’ve got movements like The New Sentimentalists, and writers like Victor Pelevin or George Saunders, who blend both postmodernism, absurdity, and a warm humanism within their work. So I’ve been very interested in this tonal shift toward optimism and hope.

As for Solarpunk’s critique of dystopian writing, I do think the stance can become a bit too exclusive. It’s important to be careful of hyper-utopianism. When we have the battles we’re presently facing: police killing innocent people of color, the return of white supremacists including in our highest office, first nations people fighting for their land/water against corporate-interest pipelines, and the daily fight for equality and justice, this present dystopia needs a place to be spoken about in non-utopian terms. Otherwise we can become too idealistic and escapist/avoidant in speaking directly to the suffering.  Dystopian fiction can be there to speak to the realism of our present day struggles. And note that dystopian writing doesn’t have to be defeatist. In fact, this is a tonal issue not a content/genre issue. There is a way to give hope within the landscape of dystopian fiction, to hold up the core values of care, and love, and compassion. It’s something I strive to do within Children of the New World. I am constantly working to reveal the deep heart of love, vulnerability, and care within my characters—one which speaks toward a kinder and more loving future. And so, ultimately, I agree with Solarpunk’s critique: we need an alternative to the bleakness and despair. We are at a place in history where we need positive examples, and positive activism in all the arts toward a future of greater love, acceptance, ecology, spirituality, and justice. I’m excited to see this new genre of Utopian fiction emerging, and I look forward to contributing to it.

Tom Cassauwers is a Belgian freelance writer and journalist who mainly writes about technology. You can find him at @TCassauwers on Twitter or at his site.
Alexander Weinstein is the author of Children of the New World, and the director of The Martha’s Vineyard Institute of Creative Writing. He is a frequent contributor to Pleiades.


Previous post
Michael Noll on Aesthetic Differences in the CW Classroom
Next post
What Is Craft and What Does It Do, Part 2