Hunter Choate’s story “The Amazing Uros” (Pleiades 36.1) was named a “Special Mention” in the Pushcart Prize 2017. Congratulations, Hunter! An excerpt is included below. To read the whole issue, click here.

The Amazing Uros’s costume is a kaleidoscope against the gray sky. At the edge of the ten-story rooftop, he stands on one hand, balanced atop a teetering stack of hard plastic balls. An impossibly thin tightrope bridges his building and the next. His assistant, Maja, looks like a toy doll in wait at the far end of the rope. Her red fox—her beloved pet—nuzzles her legs. There are those of us in the audience who cannot bear to watch, who skitter away in hushed horror, careful not to startle Uros, lest he plummet to the concrete below. Others of us stare transfixed, some of whom are ignorant of the myth. Followers of The Cult of Connection and The Divide surely know the story, while still others are familiar with the rumor that, as goes the fate of The Amazing Uros during a performance, so goes the fate of his audience.

There was the time early in his career when Uros backflipped along the icy perimeter of the National Museum of Slovenia’s roof. The action attracted a small crowd in the snowy, pointillist morning. The cheers rang out until the moment Uros fell. Upon impact with the ground, he broke several bones and lost consciousness. All around him, the audience too crumpled, each of their forms twisted as Japanese calligraphy on the white paper lawn. All of them injured in exactly the same manner, their duplicate casts spotted throughout Ljublijana in the following weeks.

Some of us also know the story of how Uros entertained a group in Texas with a matador performance at Palo Duro Canyon. A dozen bulls charged one-by-one while he waited. His left foot balanced on the canyon’s rocky ledge, while his right dangled over the abyss behind. The red taunt of his cape fluttered beside his torso. As each horn nearly gored Uros, he coaxed the beasts over the cliff. Rather than plummeting to the canyon’s base, bull after bull shattered into a murder of crows that peppered the clear blue sky. It was after the performance when a lone cowboy, a single drunk, heckled Uros, called him a fake. In response, Uros sent his lovely assistant, Maja, fox in hand, to fetch two ball-peen hammers and two blindfolds, and place the instruments atop a waist-high red rock boulder.

Uros challenged the drunken cowboy to a game of skill and nerve—each man would blacken his vision with the blindfold, spread his hand wide upon the rock, and hammer the spaces between his fingers. The man swayed in place, considering. Even in his stupor the drunk eventually declined. Uros urged the man to reconsider, said the ability to change the trajectory of certain events was a mirage. What was at stake now was honor. The man, sobering, refused again but urged Uros to perform the trick for the crowd, to prove his authenticity.

—to read more, purchase the issue 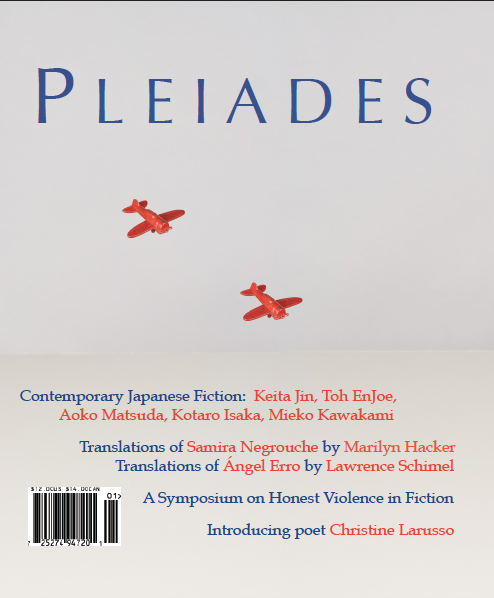 Previous post
POEM OF THE WEEK: Maggie Smith
Next post
And the 2018 G.B. Crump Prize in Experimental Fiction Goes to