POEM OF THE WEEK: Maggie Smith

Because a lie is not a lie if the teller

believes it, the way beautiful things

reassure us of the world’s wholeness,

of our wholeness, is not quite a lie.

Beautiful things believe their own

narrative, the narrative that makes them

beautiful. I almost believed it

until the new mother strapped

her infant to her chest, opened

and jumped. My daughter tells me,

after her preschool field trip

to the Firefighter Museum,

about the elephant mask, its hose

like a trunk, and the video of a man

on fire being smothered in blankets.

She asks me if she knows anyone

who got dead in a fire, anyone who

got fired. When will I die? she asks.

When I was a child, I churched

my hands, I steepled my hands,

and all the people were inside,

each finger a man, a woman,

a child. When I die, will you

still love me? she asks. The mother

cracked on the pavement—

how did the baby live? Look,

he smiles and totters around

the apartment eight stories up.

of the world’s wholeness:

each child sliding down the pole

into the fire captain’s arms.

itself as such: buy this whole apple,

A lie is not a lie if the teller

believes it. Next time the man

in the video will not ignite. 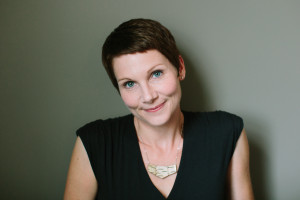 Maggie Smith is the author of, most recently, Good Bones (Tupelo Press, 2017) and The Well Speaks of Its Own Poison (Tupelo Press, 2015), winner of the Dorset Prize. Her poems have appeared or are forthcoming in the New York Times, The Best American Poetry 2017, Ploughshares, Tin House, AGNI, and elsewhere. In 2016 her poem “Good Bones” went viral internationally and was called the “Official Poem of 2016” by Public Radio International. Smith is the recipient of fellowships from the National Endowment for the Arts, the Ohio Arts Council, and the Sustainable Arts Foundation. She lives and writes in Ohio.