POEM OF THE WEEK: Mikko Harvey

Andre got up and gave a crow call, the same one

he gave every year—well, maybe a little sharper

this time around, but still not enough to take the cake,

so he sat down.

of metallic chairs in the Gamemaster’s basement.

Jessica, a newcomer, tried a hawk call. Sit down,

Jessica, you have much to learn, was the general

unspoken feeling. And so she did.

There was Jon with his overeager chickadee

and Desiree with her competent but lifeless oriole,

both sitting down in turn.

Then Martin, the mailman, surprised everyone

with a barred owl call. The Association

looked at itself nervously. This was the first time

someone had brought an owl call to the circle.

no harm done, and in fact, thank you Martin,

this was nice, but sit down now, because nice

is not enough. And so he did.

Next up was the one we used to call Sarah

before she became a Burning Wing. She sang

She sang it again. Her face looked calm.

You could tell she already knew her fate.

She sang it again. The Association rose to its feet.

She sang it again. A certain ecstasy spread

And she never stopped singing it—

not when we lifted her to our shoulders, chanting,

not when we carried her through the shadowy hallways,

not when we peeled off her clothing, everybody wanting

to touch the sublime, not even when we slid her bare body

into the tub full of gasoline and the Gamemaster struck 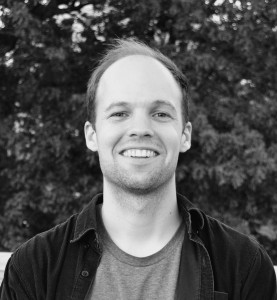 s the author of Unstable Neighbourhood Rabbit (House of Anansi, 2018) and his poems appear in places such as Field, Gulf Coast, Iowa Review, and Kenyon Review. He currently lives in New York City, where he is the Joseph F. McCrindle Foundation Online Editorial Fellow at Poets & Writers Magazine.