POEM OF THE WEEK: ALESSANDRA LYNCH

It took seconds for him

to push me down then he was done—

I was supine.  Perpendicular, the tree. That night

we made a kind of staggering diagram in the parking lot.

How had he risen from me?  Jerked out, rolled

Crude knuckles scuffed by fatigue and dust, the roots

of the tree inches from my face.  Had he gripped

my wrist, pressed a knife at my neck?

For decades I’ve walked in a daze.

through insect-amputees who are not dead

in a daze through this day’s recitations.

Low crawl of red through the leaves

I pulled myself up.  Parallel, the tree.  That night

we made a kind of shuddering frame for the air.

How had he gotten me down?  Had he seized

my arm or waist….I don’t remember the least.

The daughters march with their blindfolds on,

their dresses stiff-whipping around their bare ankles,

straight into the Arctic.

They make a voiceless parade,

They move with the inevitability

of dreams.  I am someone’s daughter among them.

Once upon in a parking lot…I said

repeatedly…then my voice faltered, fell off, my eyes distracted

by wind insistently pulling the curtains

apart and the dead flower in its glass of water.

The girl it happened to crawled out

straight into the grass that bordered the lot

where she lay face-up, a cloth

in her yellow cheek, the two heaps of her eyes,

her flopping elbows, and where

was,  licked by leaves and wet dark.

You’ll find me there too –I am sweeping

up seed-husks and twigs to clear a circle around her.

I keep a respectable distance

while admiring her silence and how substantial

she looks, how weightless she is.

There is something beautiful about her even as she

perforates, eaten by mites and rot, something coolly autonomous

as though she never belonged to the body.

Look again and the doll isn’t a doll at all

but a lump in the grass, doubled-over, small, hard-eyed as bone.

No assailant in view.

faint as starlight at the edge of dawn   faint

Shame is my orientation.

See the straight pink pines by the wildflower field, the black

eyes edged by petals staring through me?  And the panic

of wild turkeys wherever I loom.

There are mosses and twigs and camouflage rods in the forest,

and leaves in the dusty trees to hide behind.

But I awaken again, too clear, in that

memory….what I didn’t do, what was done.  The

cock-limp and stutter and smear—.

who taught me Shame? Why did I take it

Why can’t I inch forth?

Will I ever stop sinking?

How is it I always feel wrong?

If I could slip you off—quick as cornsilk….

If you hadn’t become my skin, Shame

If you hadn’t become my shame, Skin

the dream-bee burst through an orange bloom

dream-bee burst through a bloomy world

burst me from the dream

the stranger heaved his weight on me

the stranger bore a hole in me

the stranger tore the me from me

leaden as the bullets

I keep lining on my sill

I am heavy and multiple

When x skin x blood when

can’t find the body that belongs to my voice

or my voice that belongs to the harm

the things you spat out:

Thinking in my thinking I’m making it alive flinching from my bloated white shadow the lamp  in the window is a man’s hat the man waits in the narrows to get me think it through hasn’t he already gotten me or this time I want to really feel it know it is me being pushed down close to those exposed roots it is me think myself into staying embodied I don’t want to shudder apart like ash between december trees or drift up like mindsmoke want to own up to my body  I want to know it is my body pressed into the cold ground by a stranger who had no second thought no first or did he think I was a shimmer a hole an outlet an animal was I his father or mother or did he see I had my own shape shuddering as bodies do when they are sick with a virus I had a name he didn’t ask for oh now I’m thinking again he called me “Stephanie” as though I would answer to that, as though I was in his movie as though we’d done things together—he wasn’t an animal after all he was human and he wasn’t and I was a thread so wavery so frayed  nothing followed….

you have to be a god to get away with it

and then the women always turning

into something else: bull-flower, frog, that laurel tree she asked to be

I’m expert at the swift-lope-through-scarred-hills.

That girl who is me now?  She’s split apart.

in a small house by a dried-up sea. For decades she’s been hoarding

Bring her bread, but no flowers– flowers signify

something alive, something that thrives even in sand.

She smells of salt and blood.  She won’t ever

meet your eyes.  Her skin is dust-dry.

If you pour water straight from the pitcher

down her throat, she won’t flinch or grab

a rag when it splashes to the floor.  She’ll sit

slack in her straightbacked chair.

Do not touch her hands—she will  tighten

her grip till you both turn white and cold, your lips

the greenish purple of unripe plums.

Don’t offer her a scarf—she’ll knot it

around your neck, sand-flies will swarm

from the linoleum, thicken around your shoulders,

she’ll begin to tell her story, the one with no beginning or ending.

She’ll recite it by heart—

Tracing it back can be helpful, the doctor said        Eons ago

this paper was stripped

from some tree in a boggy forest,

then wrenched  through machines

“the degree to which I was…”

falters in my throat.

Now the package I ordered

arrives and I am circling and eye-ing it

beating inside this brown parcel and its

Even things with the least resemblance

is his unseeing eye fixed on me

remember his breath, or any sounds from his throat

as he thrust —did he really exist…?  I am afraid

to open.  Afraid he hurt someone else,

I not having reported.

This package is nothing I want.  A case

within an encasement, what it always is.

You have to re-train your brain  she said

The brown paper around it fluttering and

drying and fluttering, the package unopened,

trapped in its unruly twine.

The letters a blur I’m too tired to decipher.

Whatever I ordered is strapped in, unheaving, a weight

Hold it to the minute, don’t cut it open,  don’t fling

the wrapping about, hold it to the minute….

Re-write  the narrative  she said 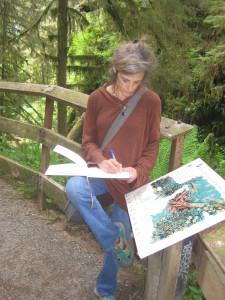 Alessandra Lynch is the author of Sails the Wind Left Behind, It was a terrible cloud at twilight, and Daylily Called It a Dangerous Moment. Her work has appeared in the American Poetry Review, Antioch Review, The Massachusetts Review, Pleiades, Ploughshares. The Virginia Quarterly Review, and other journals.  She teaches in the undergraduate and MFA programs at Butler University.