Lily Hoang on the CW Workshop

An introduction: This is the first of what I’m hoping to make a series of guest posts on teaching creative writing. I reached out to author Lily Hoang and asked if she might talk about her particular style of workshopping. Below she gives a good breakdown for why she started breaking from the traditional “Iowa” model that many writers are familiar with. Hoang gives some good background for this series. I’m hoping next to get into the nitty gritty of what we do in place of the traditional model.

If you’re interested in contributing, email me at m [dot] salesses [at gmail etc.].

Lily Hoang is the author of four books: Unfinished, The Evolutionary Revolution, Changing (recipient of a PEN Beyond Margins Award), and Parabola (winner of the 2006 Chiasmus Press “Un-Doing the Novel” Contest). With Blake Butler, she edited the anthology 30 Under 30: An Anthology of Innovative Fiction by Young Writers. Hoang serves as co-director of Puerto del Sol, Editor at Tarpaulin Sky, and Associate Editor at Starcherone Books. She received her M.F.A. in Prose from the University of Notre Dame in 2006. 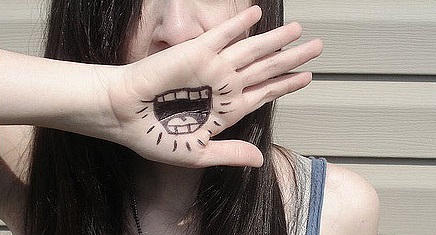 Workshop Talk, or, On Talking in Workshop

LET’S BEGIN HERE—with tradition. In a traditional workshop, a student submits a story (poem, essay, thing) and sits silently while her classmates discuss the work. Many professors like to begin the workshop with an artificial round of praise, and then a pack of hyenas are released to chew up and expel criticism. There is value to this model: the writer learns the ways her text can be interpreted and misinterpreted. Twelve or more disparate voices gladiate suggestions for improvement, and the writer exits the classroom with disheartened hope that her next submission will be better, or, at the very least less brutally disemboweled. The traditional workshop is a space to expose flaws and an open forum for the most insecure voices to front confidence and expertise.

The problem isn’t the workshop model, per se. The problem is that we are all struggling with this nascent identity as writer. It’s frightening. It’s dreadful. Let us revel.

But insecurity and identity aren’t things I can solve—not in myself and definitely not in others! So, I’ve remodeled my workshop to do what little I can to make the experience as worthwhile for the writer as possible.

And yet: the traditional workshop exists for a reason. If it didn’t work, surely it would’ve been abandoned ages ago. Workshop, no matter the model or pedagogical grounding, works: but for whom? The big myth of workshop is that the writer’s submission will be improved after it’s been workshopped—using classmates’ and the professor’s suggestions and critiques—and yes, of course having an hour or so dedicated to the discussion of your story—poem, essay, etc—is bound to produce something useful, but more often than not, the writer just gathers 12-15 jumbled up opinions, which she must synthesize into a game plan for revision.

So let me spin it this way: the workshop rarely—and barely—benefits the writer herself. I tell my students that you should consider a workshop—as in the whole semester—useful if you walk away with two good readers. Instead, I would argue that the workshop benefits the people doing the workshopping most: through the act of critique and praise, one develops not only a language to discuss craft and prose (or whatever genre) but also a personal aesthetic. I explain this to my students at the beginning of the semester, and by the time their story is workshopped, they’ve forgotten, so I have to explain it again. And again. Because the big myth of workshop is that the writer is supposed to get something big out of the experience. And sometimes that happens. Sometimes, workshop delivers. Most of the time, however, it just doesn’t.

My classroom is just a little different. I still employ a workshop model—I’m not that wacky!—but I ask the writer to lead the discussion. No more petty arguing over shit that the writer can easily answer or clarify. The writer tells the class what her concerns are, and we direct our conversation to meet her specific needs. Which is not to say that the writer still won’t have 12-15 very different opinions. I am not, after all, a magician, but I do love magic.