people say, if it comes up I’m Syrian

when my daughter mentions her “Sito”

or I’m microwaving my kibbe at work.

And it is. But I don’t need to tell you.

You’ve heard the numbers of the dead.

I never know what to say because I’m Syrian-

American, and I know only as much as you

of the city that bombs are skinning

down to concrete and bone, where children

are sleeping alone in the rubble, where Danhos

if they haven’t fled or been killed.

When my great-grandparents left Aleppo,

sewn inside clothes, but no one since

has pulled hard at the stitches. So

my horror is that of a woman who looks

at the sky and expects only blue—a luxury

my ancestors passed down to me. 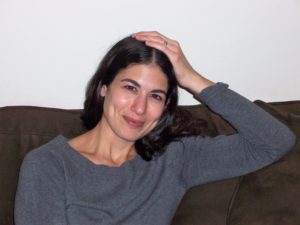 Julie Danho’s chapbook, Six Portraits, won the 2013 Slapering Hol Press Chapbook Competition. Her poems have appeared in New Ohio Review, Barrow Street, Poet Lore, and Blackbird, among others. She was awarded a 2015 MacColl Johnson Fellowship as well as fellowships in poetry from the Rhode Island State Council on the Arts. In 2017, she was a runner-up in the Discovery/Boston Review Poetry Contest. You can find more of her work at www.juliedanho.com.