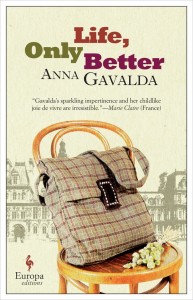 Whenever I read the news now (which is never, if I can help it), I feel thankful not to be a millennial. They’re killing chain restaurants, department stores, golf—new victims pop up every day, and yet these murderers walk free, and all that walking is killing the automotive industry. They fritter away their money on avocados when they could be buying houses and diamonds and extra houses to keep their diamonds in. They’re unwilling to work, apart from the average forty-five hours per week they already work. What exactly is wrong with them? You might ask Mathilde and Yann, protagonists of the two novellas that make up Anna Gavalda’s Life, Only Better (originally La vie en mieux, both published by Europa Editions, 2015). The two are Parisians struggling with the quarter-life crisis. They find themselves unfulfilled romantically, creatively, and financially. And both feel the need to change their lives after chance interactions with strangers. Two hundred pages of twenty-somethings complaining about their ennui (or as the French say, “ennui”) would be tedious in most writers’ hands, but Gavalda’s exuberant wit and style transform a familiar trope into something fresh.

In the first novella, Mathilde, a twenty-four year-old art history dropout, writes internet comments for a living. Every day she’s sent lists of companies with the instructions “ruin them” or “praise only,” at which point she proceeds to flood social media with either snarky or rave reviews, posted under various screen names. (Reading this book now and knowing what we do about the role of troll farms in the recent U.S. and French elections makes Mathilde’s job seem extra sinister.) Writing comments isn’t her lifelong dream by any means, but she keeps doing it because, as she puts it, “Everything’s just comments.” The simulacrum precedes the real, and why fight it? So Mathilde keeps tweeting mean things about Superyoyo.com, and she keeps getting drunk and hooking up with guys who have Fight Club posters in their bedrooms. (Or worse yet, hooking up with writers—one plot point involves an old love letter from Mathilde’s pretentiously literary ex-boyfriend. A sample: “Your hips were like two beautiful brioche tops…” Ugh, we get it, Anna Gavalda; writers are the worst people on Earth.) Nothing can inspire her to change, not until she loses her bag, which, besides its sentimental value, contains ten thousand euros.

After despairing that she’ll never see her bag again, Mathilde gets a message instructing her to meet a stranger in the same café where she left it. The stranger turns out to be Jean-Baptiste. In the kind of lightweight, feel-good stories that Mathilde’s ex always loathed, this scene might be a meet-cute. Jean-Baptiste, though, at first appears to have more in common with Flannery O’Connor’s Manley Pointer than he does with any romcom hero. He’s “like Jack the Ripper’s country cousin.” He’s missing the tip of one finger and has a briefcase full of knives attached to his belt with a chain. The two share an awkward drink while Mathilde wonders if she should try to grab her bag and run. Eventually, though, he gives her the bag, which still has all of her possessions in it. Days later, Mathilde can’t stop thinking about Jean-Baptiste. Thanks to a series of mishaps, she can’t get in touch with him, and so she goes out night after night, searching all of Paris for him.

Despite being conditioned by years of sitcom-watching to believe that the pretty girl always falls for the homely weirdo, I found Mathilde’s obsession with Jean-Baptiste a bit of a stretch. She reasons,“…there were enough bombs in that bag to ruin my life,” and yet he gave it all back without expecting anything in return. Refraining from ruining someone’s life seems like a fairly low bar, but I suppose women have settled for less. Perhaps what’s really significant about Jean-Baptiste is what he represents for Mathilde—authenticity. After wasting so much of her life pretending to be other people online, she’s drawn to someone who is only ever himself.

Authenticity is also the main ingredient missing from Yann’s life. Yann is twenty-seven and has earned a degree in design, only to find himself working as a demonstrator of “Woof-Woofs,” which are “little Korean robots designed for domestic, recreational, and household use.” It’s a steady job, at least. Yann goes to work, comes home to his girlfriend, and feels more or less content, except for when he occasionally imagines jumping into the Seine: “Come on, it murmurs. Come on, it’s only me…go ahead…we’ve known each other for so long…” Then one night he meets Alice and Isaac.

If there can be such a thing as a manic pixie dream guy, and if he can perform that role for another heterosexual man, then that is what Isaac is for Yann. Yann admits to falling slightly in love with Alice, but Isaac truly captivates him, with his clownish personality and zeal for life. “Yann, you shouldn’t think so much, my friend,” Isaac says. “It’ll make you stupid.” The two sit up all night drinking wine by the light of votives made from clementine peels. (Did everyone else know you could do this? You twist the pip into a wick and fill the bottom of the peel with olive oil, apparently.) As the candles burn down and the wine bottles empty, Isaac dispenses his earthy wisdom that snaps Yann out of his stupor. Yann realizes what he must do, which is break up with his girlfriend, Mélanie.

This was the only other moment in the two novellas where I found myself drawn out of the story. Yann contemplates whether or not he can go through the breakup, listing all the ways in which he and Mélanie are not a fit. He notes that instead of clementine peel votives, her candles are “‘décor’ bullshit that stinks of coconut.” She always eats his desserts, she talks over the end credits of movies, and she behaves condescendingly around his parents. Aside from the superficiality of all but the last of his reasons (the clementine trick is great, but come on), we never see Mélanie in a scene. She only appears as a disembodied text message or a list of grievances. So it’s difficult to say how much weight the question of whether or not Yann should leave her ought to have, or how we should feel once he decides.

We never learn if Mathilde or Yann have made the right decisions. (By the end of Mathilde’s story, I’m still worried that Jean-Baptiste is somehow going to steal her leg.) In both cases, what counts is that the main character finally decides something. Their generation has inherited an absurd and terrifying world. They’ve been told from a young age that “the ice caps melt a little more whenever Mommy starts her car engine,” and yet they are still expected to wake up every morning and sell Woof-Woofs or antagonize yo-yo companies. They may not know exactly what they want. Maybe it’s a nine-fingered knife salesman, or maybe it’s a fun new way to make candles—they only know there has to be something else.

Tina Kover’s translation is completely natural sounding, which is no small feat in working with a writer who experiments so gleefully. Gavalda writes as if she’s never been told she can’t do something. She might switch the narrative point of view without warning. She might make up new expressions. (Not to mention all of the parenthetical asides.) (Sometimes more than one in a row.) Gavalda, whose debut story collection won a Grand prix RTL-Lire, has had a few of her numerous bestselling books adapted for film and television. She has been compared to Dorothy Parker, and rightly so, with the way she balances humor and tragedy. Her bubbly style makes it possible to withstand the blow of lines like, “…my granny Saint-Quay explained to me that you could recognize happiness by the sound it made as it left.” Life, Only Better visits some hopeless places, and yet its characters learn to hope again. May Gavalda’s whimsy sustain us all in this scary century.

Previous post
What Is Craft and What Does It Do: Part 1
Next post
Against Page-Limits, or: Does the Length Match the Reach?