An Interview with Esther Lin

Joshua Cobb–a senior at the University of Central Missouri, editorial intern for Pleiades, and a social media intern for UCM’S student literary journal Arcade–interviews Esther Lin, whose poems “When I.C.E. Came for Me” and “Illegal Immigration” appear in the Summer 2019 edition of Pleiades. 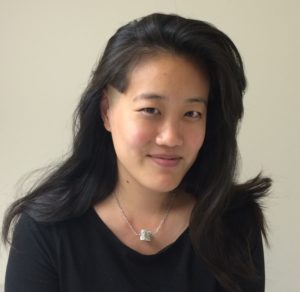 Esther Lin was born in Rio de Janeiro, Brazil, and lived in the United States as an undocumented immigrant for 21 years. She is a 2020 Writing Fellow at the Fine Arts Work Center in Provincetown. She is the author of The Ghost Wife, winner of the 2017 Poetry Society of America’s Chapbook Fellowship, and has received honors from the Crab Orchard Reviewand Poets House. Her poems have appeared or are forthcoming in The Indiana Review, The Missouri Review Online, Ploughshares, Triquarterly, and elsewhere. A former Wallace Stegner Fellow, she currently organizes for the Undocupoets, which promotes the work of undocumented poets and raises consciousness about the structural barriers they face in the literary community.

JC: Were you ever afraid that the poetic and political elements of “When I.C.E Came For Me” and “Illegal Immigration” might bother some readers? Have you ever had people complain about the presence of politics within your poetry?

EL: Not at all. I don’t believe poetry is apolitical. Audre Lorde says, beautifully, “Poetry is the way we help give name to the nameless so it can be thought.” The undocumented are among the great many nameless in the United States, and if undocumented writers can alert or discomfit readers on what our lives and our art are like, then I’d call that a good day’s work.

The undocumented status isn’t easy to write about because it’s an enormous and varied issue. For some, it’s a necessary way of life. For others, it’s a way of legalizing racism. When we say undocumented, we pretend the problem is bureaucratic. For me, much of the work of poetry is breaking down those legalities into image and narrative, without distorting truth or cruelty.

JC:Many of the images in “When I.C.E Came For Me” revolve around nature and animals. Why did you decide to use that sort of imagery in a poem dealing with the government and the violation of human rights?

EL: For me, that poem is not so concerned with nature and animals but artifice. The earliest art humankind is known to make are cave paintings, in Spain and France, of beautiful lions and bison. I began to wonder what kind of art an undocumented person would invent, what might serve as our first metaphors. People who are or were undocumented don’t necessarily share a tradition, because we’ve been driven out of public spaces and public discourse. And in the meantime, we’ve been made metaphors of, demonized, or otherwise flattened. I thought the image of an “early undocumented” woman attempting to escape artifice was an interesting one. I hope! Her place of exile isn’t a cheerful one, but perhaps it’s better than the alternative.

JC: The subject matter of both of your poems in Pleiades is one that people, both immigrants and many citizens, will relate to directly or feel very passionate about. With such a huge audience that can connect to the message you are trying to send is there a specific impact or reaction you hoped your poems would invoke in readers? Why do you think poetry can help educate others on the human rights issues that are occurring all over the world, especially within the United States?

I am lucky to have found poetry. Poetry loves complexity, contradiction, and irony, and the undocumented experience has a lot of both.

JC: Who are some of your favorite authors who have written about or are currently writing about the experiences of immigrants in the United States or have or about other human rights issues? Did any of their works have any influence on your poems?

EL: There are wonderful poets I love who write about human rights and justice–such as Adrienne Rich and Cornelius Eady– or about immigration, such as Juan Felipe Herrera and Cathy Linh Che, but I don’t read in search of experiences that mirror my own. Poets who capture the intensity of major life events, regardless of the kind, such as Louise Glück, Frank Bidart, Etheridge Knight, Spencer Reece, Paisley Rekdal, have been major figures for me in the last few years. In varying ways, their language has thrilled me, taught me new ways of thinking. If there is an overlap of experience, that’s lovely, but I don’t seek it.

2019 was, for me, the year of Bidart’s The Book of the Body. I was fascinated by how Bidart navigated the breadth of the page, islands of verse springing boldly on the east side of the page, where I’d never ventured. Until reading his collected this year, I was primarily interested in—and frustrated by—my page’s north-south axis, but Bidart allowed me to see how conflicting modes of thought could be cogently positioned.

JC: Both of your forthcoming poems in Pleiades deal with identity, but so have some of your previous works like “The Ghost Wife.” Why is lineage important to you? Why is representation of different identities important in the world of literature?

EL: Rich says, everyone needs an art of their own, “to remind us of our history and what we might be; to show us our true faces—all of them, including the unacceptable.” How dull would the world be if there were only one voice, whether it was Western or Chinese; public or hermetic; pyrotechnic or restrained. Of course representation matters. The world is so much more varied, perverse, and disobedient than any single voice or vision can accommodate.

I co-organize the Undocupoets, with Janine Joseph and Marcelo Castillo Hernandez. We promote the work of undocumented poets and award an annual fellowships of $500 to two current or formerly undocumented poets. Each year, we receive applications that dazzle us with how very different each experience is; each poet, their concerns, and their aesthetics. If you’re interested in our work, please consider donating here: through Sibling Rivalry Press.