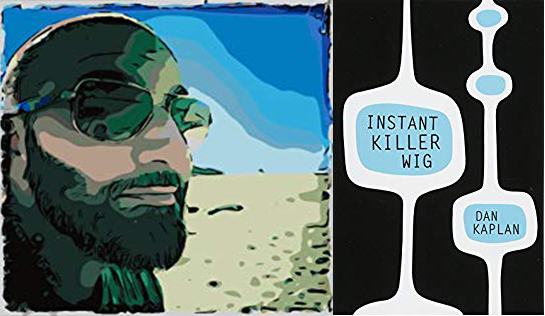 If Dan Kaplan’s great new book Instant Killer Wigwere an animal, it’d be a bat, an alluring mix of fur and reptile that refuses to solely exist within (good or bad) stereotypes. Some species of bats suck blood, sure, but other types pollinate flowers and disperse seeds the whole world over. Like Kaplan’s Instant Killer Wig, bats refuse to be just one thing; their multitudinous nature is their whole essence. As Kaplan writes in his book, “If we took away all of the water/ a watermelon would only be as big/ as a few bones.” You can’t have one without the other, but you also can’t have the other without the one.

In the morning, Instant Killer Wig’s theme song is Beach House’s “Heart of Chambers.” The heart isn’t a thing, it’s a vast series of things, interrelated and ongoing. Comprised of small museums of finiteness, is the heart. “I never discuss love on an empty stomach” Kaplan’s speaker relates in Instant Killer Wig, and Beach House’s “Heart of Chambers” is the gauze that flutters and flusters the bald sentiment.

At night, Instant Killer Wig’s theme song is Gil Scott-Heron’s “Me and the Devil.” As seen in Kaplan’s book, “The truth is we often settle for copies/ and you got the one in the picture. //In the upper provinces/ night will pull in soon and so begin undressing.”  The details are more important than the outcome, the end.

Instant Killer Wig has too many nemeses and frenemies to mention but the chief conjoined one involves boring narrative poetry that, straight up and down, is doing the same thing that writers thousands of years ago were doing. Kaplan’s work in Instant Killer Wigis devoid of the ego that certain writers have, a hubris that is under the impression that readers really care about the writer’s family life or home life rendered poetically. Instead, these are poems that force the reader to think, not mindlessly agree. To wit:

We are not alone in this position.

A leg up, a finger on conditions.

Beside ourselves, we move our likenesses

the spiders in their complicated math

slip the errant limb or stomach

the wrecking ball. In the architecture

of gossamer we are taken lightly

from our posts and set out

on the breeze, the spiral and helix

mapping our drop. Cut or flooded

we wring and squeeze. We start

again. It’s in our blood.

Instant Killer Wig aims to startle and, in startling, to linguistically stain. Don’t be afraid. But don’t not be either.

Jeff Alessandrelli is the author of the poetry collections THIS LAST TIME WILL BE THE FIRST(2014) and Fur Not Light(2019), both from Burnside Review Press. Just published in the US and UK in March by the UK press Eyewear, Jeff’s also the author of the essay collection The Man on High: Essays on Skateboarding, Hip-Hop, Poetry and The Notorious B.I.G. Recent work by him appears in The American Poetry Review, Pleiadesand Please Kill Me, among other outlets. Additionally, Jeff  runs and directs the vinyl-record only poetry press Fonograf Editions; recent albums have been released by Alice Notley, Harmony Holiday and Rae Armantrout.