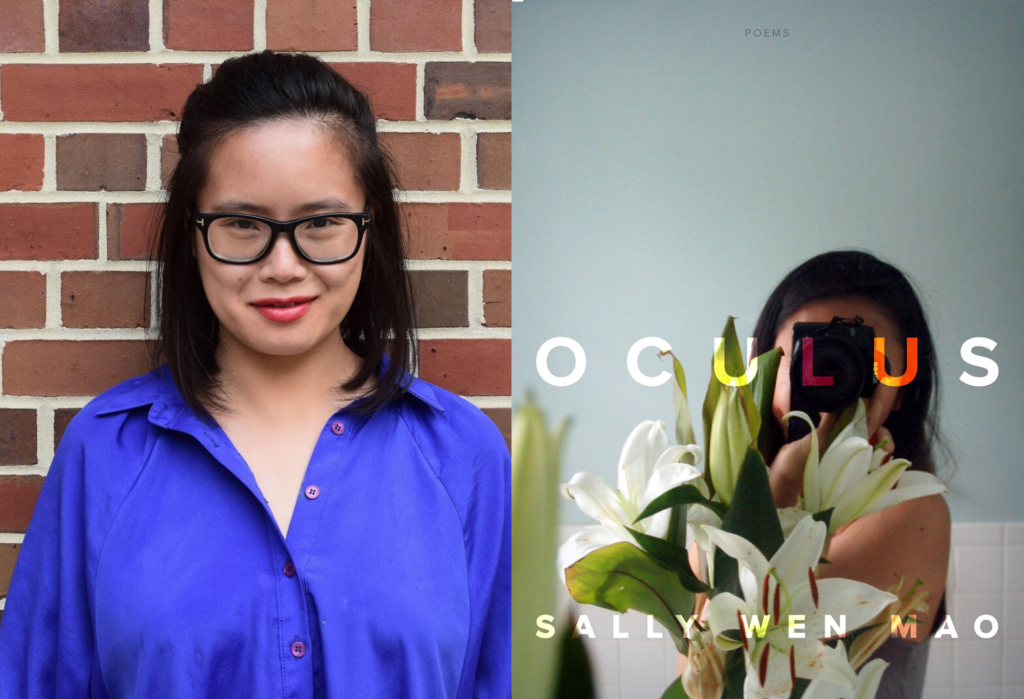 Sex. Surveillance. Survival. Sally Wen Mao’s second poetry collection, Oculus takes the reader on a cinematic passage from Hollywood’s second Technicolor film, The Toll of the Sea, to Anna May Wong reimagined, to a teledonics future of “a pornography live / through open / electrodes” [11], to the histories of Orientalism and Occidentalism, to the multi-dimensional meaning of the Chinese and Chinese-American identity in today’s world. Mao’s “oculus” is not simply an opening or a circular window as the word is traditionally defined. Mao’s “oculus” is more than that. It’s a camera of rapidly-changing angles. For the audience, this camera and its rotating lenses and angles and ever-changing presence is a constant throughout this journey—the camera angle is both swift and slick in Mao’s effortless poetic turns.

Take, for instance the following lines from “Occidentalism”:

a war, a treaty, a concession, an occupation,

a man parting the veil covering a woman’s

face, his nails prying her lips open. I love

the fragility of a porcelain bowl. How easy

If only recovering the silenced history [9]

In Mao’s poetry, no single line or word is out of place. Every placement is purposeful. And the juxtaposition of “I love” right after “his nails prying her lips open” is nothing short of brilliant. Mao plays with this irony throughout her work: “I love” may follow “prying her lips open,” but in reality, it signals a turn, one in which the female voice, despite history, reclaims her space with “the fragility of a porcelain bowl” that shatters. Mao plays with another irony with this choice: “porcelain,” an adjective typically used by white men to describe East Asian women’s skin, faces, bodies, etc. is now not only reclaimed, but also broken.

And with the turn of the camera from “fragility of a porcelain bowl” to “to shatter chinoiserie” to the juxtaposition of Ancient China with the Han Dynasty to the modern Ai Weiwei reference, the speaker sheds the “chinoiserie” body of the western lens, rejecting a white-washed history of “blonde dust.” While the Asian female speaker takes control of the camera’s direction, denying the white male gaze, she does emphasize the difficulty of “recovering the silenced history.” But the ending also plays with more irony. While Mao’s speaker recognizes that she may not be able to protect the young girl who looks like her as she encounters hegemonic texts in a public library, she does italicize the final four words: “go ahead— // rewrite this.”

“Occidentalism” is one of many pieces in this collection that raises the following questions: “Who is controlling the camera that follows the subject of the poem?” “How does the subject of the poem take control of the lens??” “Who the follower? Who is the voyeur? Who is the admirer?” The theme of voyeurism, in relation to the oculus is especially evident in “Mutant Odalisque.” However, right away, Mao’s speaker flips this so-called voyeurism on its head. This isn’t an odalisque in the traditional sense of Ingres, for instance. Mao’s odalisque is “mutant,” and  the reader is warned that “This is not an ode.” Instead, it’s a contemporary call to action: “March ladies. March for your dignity. / March for our happiness.”

However, despite the clear erotic elements of the odalisque tradition, I also cannot deny the power of the female gaze within this artistic tradition. Take, for example Jean Auguste Dominique Ingres’ La Grande Odalisque. Her body is serpentine, giving her form a further curvature. She brushes a peacock feather duster against her skin. Yet, the most striking part about this 19th century masterpiece isn’t the odalisque’s nude body, but instead, the odalisque’s gaze directly at the viewer. And that’s the key: for as much as she is the muse, she also reclaims the gaze. Mao’s “Mutant Odalisque” [13] takes this idea even further, not only with the political, but also with the direct address of “O Vesalius, god / of anatomy, is that why they ask so softly for my name” in response to “Do they marvel at a conquest—” and “Do they think of me as soiled / or new soil.” Mao’s direct address of another subject is unabashed. It comes and calls out as a response to being followed or surveyed.

On top of these artistic references, I’d also like to point out that Oculus is a decadent collection. Look no further than lines such as “Our dining hall was the Santa Maria Novella. / Our bedroom was the Izumo Shrine” (“Ghost Story,” 5) and “I watch Faye Wong smoke cigarettes between takes / in cropped cut, oversized button-down, grosgrain / shorts” (“Anna May Wong Dreams of Wong Kar-Wai,” 75). But then, a poem, such as “The Five Faces of Faye Valentine” make me feel a more nuanced emotion: nostalgic. And a poem, such as “Ghost in the Shell” makes me feel hopeful. I’m amazed by Mao’s ekphrasis. I’m amazed by how the poet is able to take the classic anime’s message and make it even more contemporary, even more relevant—even more political. I always knew that Faye Valentine was the badass Cowboy Bebop heroine, but in Mao’s world, she is even more, dare I say, dynamic on the page. She is beyond her purple-black short hair, her red lips, her sexy, skimpy outfit—she is “This is what night imagined when it imagined / a feral woman, jaw open and swiping.” She is raw. And more importantly, she is woman.

And with “Ghost in the Shell” [83] I not only feel nostalgic, but I also feel redeemed. Yes, Mao’s speaker does point out “Year 2017: / someone has implanted Scarlett Johansson’s / face onto mine,” the beyond blunder of the privileged white actress playing the beloved anime character, only to “please” a targeted white audience for the sake of a summer blockbuster. But similar to the “Mutant Odalisque” analysis, I appreciate Mao’s direct control of the camera, which equates to the direct control of the message: “So watch out, Scarlett / O’Hara, this brutish reign of cinematography / is about to end—history flensed, data wiped.” I also want to emphasize the sheer brilliance of the final couplet: “The sun doesn’t set in Lost / in Translation, but I will make sure it does here.”

Mao’s donning of the actress hat adds on to the appeal of this collection. Her Anna May Wong series is an absolute standout. I love her calling out of western beauty standards and conventions. The themes of sex, surveillance, and survival resonate in these poems—for example, in “Anna May Wong on Silent Films,” Mao’s Wong persona states, “It is natural to live in an era / when no one uttered— / and silence was glamour // so I could cast one glance westward / and you’d know what I was / going to kill.” Wong has to survive in silence in this silent era of film. She is also surveyed, in that she is watched on screen, the subject, yet reminded that “someone with my face / could never be loved.” Finally, she is sexed in her movements, especially in her gaze.

Mao also highlights the racial problems within western cinema in other Anna May Wong poems, for instance, the tongue-in-cheek “Holly Golightly, I can’t go / lightly” and the response to Mickey Rooney’s more than cringeworthy yellowface in Breakfast at Tiffany’s: “Beside her, Mickey Rooney plays Yuniohsi, // another tapeworm-eyed uncle with a limp. And I yawn / at another generation of white men in yellowface” in “Anna May Wong Has Breakfast at Tiffany’s [36].

I’d now like to draw emphasis to the masterpiece that is Mao’s “The Toll of the Sea,” which as Mao quotes was the “first successful two-color (red and green) Technicolor feature, a retelling of Madame Butterfly starring Anna May Wong (1922)” [27]. At first, it seems that the poem is set up as a binary of red or green, either “GREEN means go, so run—now—” or “RED means stop, before the cliffs jag downward.” But this is then changed with the appearance of “WHITE the color of their son / WHITE the color of erasure,” in which the speaker confronts her erased history, which is more than lost footage. And with the volta of “BLUE,” which is notably not “black / white / red / green” of the Technicolor screen, Mao’s speaker completely reawakens the narrative; “There she awakens—prismatic, childless, free—” because “BLUE is the opposite of sacrifice.” Mao’s speaker not only shifts the camera, but she also completely rewrites the Technicolor narrative. So, what are we left with? A future that is even more brilliant than Technicolor.

Sally Wen Mao is the author of Mad Honey Symposium (Alice James Books, 2014) and Oculus (Graywolf Press, 2019). Her work has appeared in Poetrymagazine, Black Warrior Review, Guernica, the Missouri Review, andWashington Square, and as well as in the anthology The Best American Poetry 2013. She earned an MFA from Cornell University and has received fellowships from Kundiman, Hedgebrook, and Saltonstall Foundation. She currently lives in Brooklyn, New York, and teaches in the Asian American Studies department at Hunter College.

Dorothy Chan is the author of Chinese Girl Strikes Back (Spork Press, forthcoming), Revenge of the Asian Woman (Diode Editions, March 2019), Attack of the Fifty-Foot Centerfold (Spork Press, 2018), and the chapbook Chinatown Sonnets (New Delta Review, 2017). She is a 2019 recipient of the Philip Freund Prize in Creative Writing from Cornell University, a 2014 finalist for the Ruth Lilly and Dorothy Sargent Rosenberg Poetry Fellowship, and her work has appeared or is forthcoming in POETRY, The American Poetry Review, Academy of American Poets, The Cincinnati Review, Quarterly West, The Offing, and elsewhere. Chan is an Assistant Professor of English at the University of Wisconsin-Eau Claire and Poetry Editor of Hobart.