Revising the Self: Teaching Revision 12 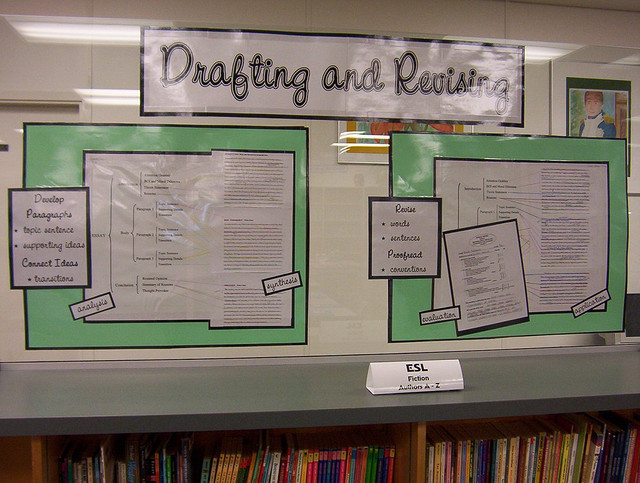 This is a continuation of our posts on teaching revision. If you’d like to contribute a guest post or response, please contact me at m [dot] salesses [at gmail etc.].

I’m teaching my revision-only course again this Spring, and though there is some repetition from the last time, including some repeated revision prompts (see here and here for old examples–I’ll post any new ones once the course has wrapped up), because of the nature of the course much of what we’ve been talking about this time is new. Our discussions revolve around the ways in which each student has approached revision and the particular and shared problems they’ve faced. I love talking about revision–I often feel that the discussions about revision are the most useful part of the course, beyond workshopping. Sometimes it makes me think that the way writers often talk about their work post-MFA, that is: off-the-page and in conversation, may be the most productive way of talking about the work in class, too.

One of the things that has come up multiple times this go-around has been the growth of the writer. One student in particular has spoken a lot about how she left her story behind a few years ago and now, revising it, she’s had to look hard at what it meant to her originally and why she wrote it and how she’s changed as a writer and person. I’ve shared with the class my story about revising my novel THE HUNDRED-YEAR FLOOD, a process that in its final stages meant a kind of therapy on myself the writer who had started my book a decade earlier. (An essay on this is here.) I had started that book a year out of college, when I was living in a foreign country, the year before going to Korea. One thing I had to do with the book was to try to figure out why I had started it then, and what I’d been hiding from myself ten years earlier, which led to the realization that the book was a lot more about adoption and hiding from oneself the fact of adoption than I had thought it was. I revised the book to reflect this in its final stages, just before going to press, and it made the book a lot better.

I was telling this story to my class, telling them how sometimes it feels like revision is the act of figuring out what the connection is between the you who started the piece and the person who is revising it x years later–figuring out what that change in the writer can teach you about how to change the story–figuring out what it is you’ve been holding on to for so long and why and how it’s changed over time and what that says about what the story’s “about”–and I realized I’d done the same thing again with my latest book.

I’ve been revising a new novel, about a man trying to solve the murder of an alternate-reality version of himself (THE MURDER OF THE DOPPELGANGER – out 2018!), which I started in 2012. I started it 6 months after the birth of my daughter. My second kid, a son, was born on Thanksgiving last year, so I’ve been doing a lot of the revision in the wake of his birth. Two births that have framed the writing of the book. Maybe that’s what reminded me that I had to check in with who I was when I started the book and what it was I was really writing about.

In the book, the narrator is estranged from his family–he’s divorced and his family (ex-wife and daughter) have asked him not to visit. I did know that I was writing about fatherhood, of course, but the other thing going on in the book is that the narrator is dating someone, and he ends up discovering that his girlfriend has met someone who looks exactly like her. When they’re all talking, his girlfriend’s doppelganger pulls a photo out and says she’s been dating the person in the photo–who looks exactly like the narrator. Except that the person in the photo, the narrator’s doppelganger, is like a much better version of him, has led a much more successful life, is well-liked, etc, and then was brutally murdered. The narrator sets off to figure out what happened to his doppelganger.

As I’ve been revising, I’ve tried to figure out how these two lines go together, what I was trying to do when I started the book. In 2012, after my daughter was born, I was feeling very depressed–I was adopted and my kid was not, and so much adoption stuff was coming up, and I worried a lot about whether or not I would be a good dad. A lot of this got into the book, of course. So how were the two sides related?

I had spent all of 2016 rewriting the first 50 pages of the book over and over again, trying to figure it out. A mentor had suggested that the book might be about running away. Later in the book the narrator goes into the world of the doppelgangers and starts disappearing from this world. This seemed to make sense. But it didn’t feel right.

It wasn’t until the election happened that I understood why. For all of November, I couldn’t get back to revision. I felt like a book wasn’t worth it. But then I wrote the election into the book. It was an obstacle for my narrator, because the world that it represented is an obstacle for my narrator. He didn’t want to run away from it, though. He wanted to unmake it, unmake the language and story about America that made it possible, and unmake that about himself too.

Looking back with this in mind, I realized what I had been troubled by in 2012. I had indeed been worried about whether or not I could be a good dad. I hadn’t been trying to run away, but to meet the change that I saw was coming. I had been trying to change. But more than that, I had been trying to unmake who I was, all that I knew about being an adoptee, in order to meet the biological wonder of my child and all that meant about who I was. That was the real fear, that I might not be able to remake myself into someone worthy of her.

Having a kid again meant revisiting that fear. And then the political landscape. I realized the murder was a kind of double murder: who dies when you try so hard to be who someone else wants you to be? and how do you kill off the person that is and become better?

I wonder if I would have been able to get to this point in the revision without having another child, or at least without having done that work the first time, in my last book. I’ve written a book about revising the self, and I’ve had to revise the self and revise my book to do it.