Poem of the Week: Caitlin Cowan

There are two black actors, so one is about to die,

you say into your longneck, a microphone

for what you know. The awful mathematics

the first to go. Here we are

at our worst, culling those we can’t know

our greedy ascent, is built on their bodies,

You swig your beer.

These guts, these knife thrusts,

from unsuspecting chests—they’re all still here

it throbs with thought; saliva so sticky

we taste the tide. I’ve returned to childhood,

cloaked in the basement’s pall, gorging

on film after unrated film because my mother

She did not know that no eyes,

no ratings board stuffed with clergy

or censors had ever seen the horror

gurgling in those old cassettes.

There is no safety. That is horror.

you don’t have enough bullets,

will survive, but the cameraman will not.

If you enter the spirit realm,

make sure you have an exit strategy.

The call is absolutely

coming from inside the house.

Why do we make them this way,

these we have to go back-ers.

Because they are us. Because

they are not. The frames churn.

I promise if our dog won’t come in the house

for our technicolor doom.

There’s a reason the asking price is low, you know?

We pore over and over the home invasions

by the unbelieveable trust—maybe that moaning

is only the wind. We won’t make the same mistakes.

Then the layoff, the stillborn, or the poodle

mangled by the road won’t slip between our ribs.

Or will it. Are there, finally, only endless

Now we know this much, at least:

If you hear a noise coming from the wardrobe,

run. If your wife tells you she’s carrying

the devil’s spawn, believe her. Leave the feral children

where you found them. When you exorcise evil,

it has to go somewhere. We understand it all, yes?

That when we bury our honey

under so many shovelfuls of soil,

if he comes back he’ll never be the same.

on the left nostril, a pockmark cratering

that gleam in his eye: that’s new.

We wait. We see what he’ll do.

The theater is all clamor—

blaring its counsel, yelling to quiet

our protagonist’s screams. The seats erupt

with strain, with worry, with popcorn and pain.

beyond her manicured reach. His chaos flits

like a songbird, and her death hovers over her—

wings blackened and preened. When they slowly drive

the knife into her lover’s side, she asks

the foolish question: why are you doing this?

Because you were home.

Parrot with no pull string, an imbecilie’s refrain.

How did she miss these lessons:

they do it because they can. Because

they’re already there. Behind you. 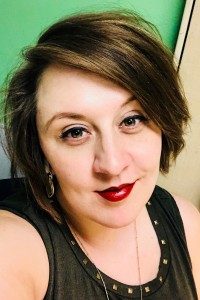 Born and raised in the Midwest, Caitlin Cowan lives and works in the warm embrace of Denton, TX. Her poetry, fiction, and nonfiction have appeared in Pleiades, Gulf Coast, Public Pool, Boxcar Poetry Review, SmokeLong Quarterly, Entropy, and elsewhere. Nominated for the Best New Poets anthology series and a semifinalist for the Ahsahta Press Sawtooth Book Prize, she has won the Littoral Press Poetry Prize, the Mississippi Review Prize, the Ron McFarland Prize for Poetry, and has been a participant at the Sewanee Writers’ Conference. She holds degrees from The University of Michigan, The New School, and The University of North Texas, where she teaches in the Department of English. You can learn more about her work at caitlinpryor.com.

Previous post
Against Page-Limits, or: Does the Length Match the Reach?
Next post
Michael Noll on Aesthetic Differences in the CW Classroom