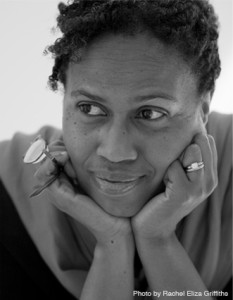 Janice N. Harrington writes poetry and children’s books. She grew up in Alabama and Nebraska, and both those settings, especially rural Alabama, figure largely in her writing. Her first book of poetry, Even the Hollow My Body Made Is Gone (2007), won the A. Poulin, Jr. Poetry Prize from BOA Editions and the Kate Tufts Discovery Award. Her second book of poetry, The Hands of Strangers: Poems from the Nursing Home, came out in 2011. She is also the winner of a 2007 National Endowment for the Arts Literature Fellowship for Poetry and a 2009 Rona Jaffe Foundation Writers’ Award for emerging women writers. Her children’s books, The Chicken Chasing Queen of Lamar County (2007) and Going North (2004), both from Farrar, Straus and Giroux, have won many awards and citations, including a listing among TIME Magazine’s top 10 children’s books of 2007 and the Ezra Jack Keats Award from the New York Public Library in 2005. Harrington’s poetry appears regularly in American literary magazines. She has worked as a public librarian and as a professional storyteller, telling stories at festivals around the country, including the National Storytelling Festival. She now teaches in the creative writing program at the University of Illinois.

Harrington recently gave a public reading at the University of Central Missouri Gallery of Art & Design. Intern Christopher Eithun had the opportunity to interview Harrington regarding her latest book, The Hands of Strangers, the writing life, and where/how/why poetry is written.

Is there a poem that you especially want readers to find in your book?  A poem that unlocks the collection?

Maybe the best way to understand The Hands of Strangers is to read the poem “May Engles.”  I wanted the book to build a monument to small, unheralded, and vulnerable lives. The book succeeds if it triggers an empathic reading of the lives around us.  Gwendolyn Brooks wrote that we are each other’s bond.  The poems in this book try to touch those bonds.

If you weren’t a poet, what would your dream job be?

My dream job?  Exactly what I’m doing now, even though it’s not easy.  I learn from students, and I’m inspired by their questions and perspectives.  Eight years ago, I worked as the Head of Youth Services at the Champaign Public Library, helping my community and attracting children to new books.  I had a rewarding career, but I made the difficult decision to leap into academia and into teaching because I thought you should ultimately do the thing that meant you would keep growing and keep learning.  And that’s what I’m doing.  Some days I think performing brain surgery with a toothpick would be easier than teaching how to write poetry.  But I wouldn’t give up the challenge.

I understand that you have another book forthcoming.

Horace H. Pippin fought in World War I as a member of the legendary 369th Infantry.  Injured by a German sniper’s bullet, Pippin returned home with a disabled arm that left him in constant pain.  Like many veterans, Pippin came home haunted by the war.  He suffered from “blue spells.”  During one of those spells, he made his first burnt wood picture, searing a wooden plank with the image of a man walking through a snow storm.  He called it Losing the Way. Pippin went on to become the best known African American painter in the late 1930s and early 40s. I find myself drawn to Pippin because he had every reason not to make art—class, education, racial barriers, disability—and yet he did so.  His self-awareness and his commitment to his own style of painting is inspiring.  One of the challenges of writing this book was simply deciding what kind of book it would be.  An exact biography?  A hybrid?  I knew that I didn’t want to “channel” Pippin’s voice or feelings.  The second challenge then was to learn as much about his life and art as possible. I traveled to his home in West Chester, Pennsylvania and to Goshen, New York where he lived as a child.  I visited numerous museums to see his most celebrated paintings.  I read his war notebooks available online at the Smithsonian Archives, and I researched as many primary and secondary sources as I could—all in an attempt to learn who Pippin was and to drive my imagination into poetry.

But as I worked on the Pippin manuscript, I found myself learning from his life and his art: the importance of small daily acts of attention, and of the information that lies imbedded in the background of our lives.

Do you remember the first poem that turned you on to writing poetry?

Do I remember the first poem that turned me on to writing poetry?  There’s never just one poet or poem.  But I know that Ntozake Shange’s For Colored Girls Who’ve Considered Suicide When the Rainbow Is Enuf altered the landscape for me.  At that moment in the late 1970s, she was the first poet I had encountered who addressed the lives of contemporary African American women. In reading her poetry, I found a poet who spoke to me and to my life.

The most interesting location in which you have written poetry?

Poems are like cockleburs. Words, images, thoughts snag in your imagination.  You bear them home with you, and in that effort to shake them out of your mind, the poetry comes. I find there’s always poetry right where I am. I’ve written on trains, buses, airplanes, in museums, gardens, back porches, kitchen tables, libraries, in woodlands, in tents, on hikes through Scottish highlands, but mostly at home.  That’s the best place for me, an Adirondack chair on the back porch, or in my den, or on the living room sofa that sags a bit on the right side.

Are there common threads between writing poetry and writing a children’s picture book?

Certainly, one could say, concision, imagery, lively verbs, and avoiding the didactic. Good writing is good writing.  I try to bring the strongest language and images that I can in my writing for children.  Writing is hard, and it’s especially challenging to write a children’s book. And if writing alone were not difficult enough, writing for children demands that you find a way the enter the vast landscapes inside a child’s mind.  You have to understand children, and know that they have the same emotional depths and complexities as adults.  Children are the best readers because they won’t tolerate a writer who is not trying to communicate to a reader.   Kids won’t lie.  They’ll close the book and walk away.