Jerri Bell served twenty years in the Navy. Her assignments included sea duty on USS Mount Whitney and HMS Sheffield, and shore duty as an assistant naval attaché at the U.S. Embassy in Moscow. She is a graduate of the M.A. In Writing Program at The Johns Hopkins University; her fiction has won prizes in the West Virginia Writers’ annual competition, and her nonfiction has been published in Southern Maryland ParentLine, the Charleston Gazette-Mail, and on the Maryland Humanities Council History Day blog. 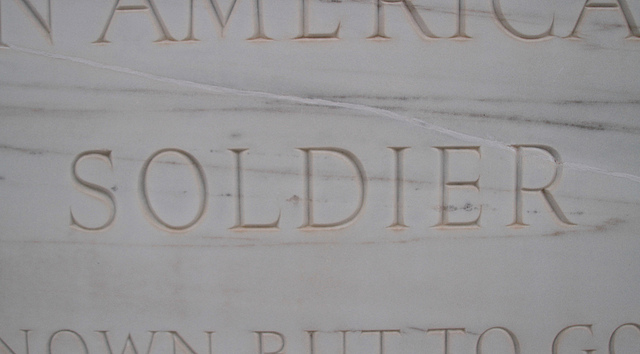 I’ll be teaching a craft-of-writing class just for women veterans later this spring. This class is an offshoot of the Open Seminars that the Veterans Writing Project offers. We’d noticed that women veterans in our co-ed seminars weren’t participating or speaking up or sharing their work as often as men or family members – even female family members. Ron Capps, the VWP director, asked me to think about why that might be (Ron already had a pretty good understanding, and I could write an entire essay on just that: patriarchy and military culture; sexual harassment and military sexual trauma – many of the women just weren’t feeling like their experiences were valid, or that they were physically/verbally/emotionally safe in expressing them). He also asked me to think about how to tailor a special seminar for women, who, we agreed, needed a “safe space” where they could begin to express themselves. We’ve been able to offer the women’s-only seminar just once so far, in the fall of 2014.

One of the opening sessions in my seminar deals with why we wanted to create a separate class just for women. I’d given the two answers above, but the examples you gave in your “Pure Craft Is a Lie” series just gave me a third – and a new way to look at craft choices. The military culture is not the same for men and women. There have been legal differences in the way we have been treated – caps on the number of women who could serve; limits on the pay grade to which they could be promoted; policies discriminating against women who were married, pregnant, or mothers; and the long series of changing “combat exclusion” laws that restricted open occupational specialties, geographic assignments, and opportunities for advancement. Yet the cultural assumptions governing war writing are all masculine cultural assumptions. That’s not a complete (or necessarily an accurate) depiction of war.

Part of women veterans’ subculture, for years, has been to deny that there’s a meaningful cultural difference in our experiences and men’s. Sometimes that has been – and probably will continue to be – a necessary weapon in the fight for full integration and for an end to gender-based discrimination. Sometimes we just drink the freaking Kool-Aid, and start to believe it ourselves. And some men – and women – are perfectly happy to take that denial of gendered difference of experience at face value, not just because it reinforces male privilege, but because it makes everything so much easier for military supervisors. One size fits all.

So I’ll be opening my class by asking women to consider and acknowledge, perhaps in their writing and perhaps just for themselves, that our culture is different; that being a minority group in a male-dominated military culture has almost certainly affected our lived experiences; and that if we’re writing about our military experiences, all of us are going to wrestle in our writing with being in a minority culture. Some of us may want to tackle the cultural difference head-on. For others, denial of that difference will be the thing that affects our writing most.

“Cultural colonization” of women veterans’ writing can affect how we handle almost every aspect of our craft. Sometimes we choose to write about men who served, instead of creating characters from our experiences or those of the women we’ve known. Thematically, we respond to a male-centric canon of war literature: we don’t know our own literary predecessors (including a National Book Award winner, a journalist whose work ensured the creation of a major national park, a bestselling writer of historical and mainstream fiction, and a prolific and powerful fantasy author). Structurally, we’re drawn to culturally dominant patterns: the bildungsroman – though, as memoirist Kayla Williams has pointed out, no woman joins the armed forces to prove her manhood; the “hero’s journey”; and the trauma/recovery narrative that’s being questioned and challenged by critics and writers from Sam Sacks to Kelly Sundberg. We worry about writing too much about relationships, family life, or anything else that make our writing seem “domestic” rather than “military.” We may avoid setting our military stories in peacetime, or in non-combat settings we were relegated to before repeal of combat exclusion laws. We may avoid the salty language that we heard and used on active duty to combat the perception that we’re unladylike or unfeminine: Kayla Williams got a great deal of negative feedback on the language she used in her memoir Love My Rifle More Than You. Or we use it deliberately for the shock value – which risks obscuring even more shocking things that we ought to be exploring.

At the AWP Conference this spring, I’ll be asking my fellow women veteran writers to address the question of craft and the dominant war writing culture in our panel “Unsung Epics: Women Veterans’ Voices.” They’re a thoughtful and intelligent group of women writers; it will be interesting to hear what they come up with in response.

Ultimately, craft choices are up to individual writers. I mentally give the literary establishment the finger and deliberately use dialect when I’m writing fiction about West Virginia: that accent shaped the stories I heard growing up, the way I spoke until I went to college, and the way that people outside of my culture react to me when I lapse into Appalachian English even now. I’m going to write that way sometimes, rules be damned. But I write Appalachian English from a place of using it myself. The literary canon can only be improved by an increase in literary diversity, by unique and novel uses of the tools of craft.

I don’t teach our co-ed veterans’ writing seminars as often as Ron Capps does. But when I do in the future, I plan lay out at least a short version of my thoughts about cultural assumptions, writing, and war literature for everyone to consider, regardless of gender. Even veterans who are men could benefit from being encouraged to think beyond traditional, male-centric forms and tropes. The Veterans Writing Project seminars are lecture-based, not workshops, so there won’t be much time for discussion or to see how bringing up cultural dominance and craft affects writing and student interaction. But it will be a start, especially for many of “my” women who are feeling silenced by the dominant culture.

Previous post
Lily Hoang’s Revision Workshop Part 2
Next post
Who’s at the Center of Workshop and Who Should Be? (Part 1)