An Interview with Jos Charles

Bret Meier, a senior in the English literature and modern languages programs at the University of Central Missouri and an editorial intern for Pleiades: Literature in Context, interviews Jos Charles, who will be reading at the UCM on Thursday, Sept. 26, at 3:30pm in Union 237B as part of the Pleiades Visiting Writers Series. 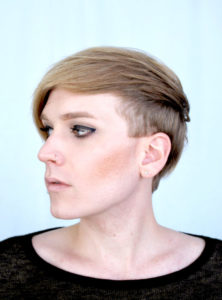 Jos Charles is the author of feeld, a Pulitzer finalist and winner of the 2017 National Poetry Series, selected by Fady Joudah (Milkweed Editions) and Safe Space (Ahsahta Press). Charles has poetry published with POETRY, Poem-a-Day, PEN, Washington Square Review, Denver Quarterly, and elsewhere. In 2016 she received the Ruth Lilly & Dorothy Sargent Rosenberg Fellowship through the Poetry Foundation. Jos Charles has an MFA from the University of Arizona. She is a PhD student at UC Irvine and currently resides in Long Beach, CA.

BM: In poem VII., of feeld, you describe identity as a series of complex layers that allow space between them, or that may pass over into other areas of identity, or perhaps one layer collapses another. One line reads, “u maye be manie foldes but not” and you relate this to, “lik the waye an asse bothe is & isnt conected to this chare.” Is this you just having fun or are you suggesting that people have a hard time understanding the nuances of identity? Are there other similar issues in which you believe people are not quite understanding the “asse/chare” relationship?

JC: Well, much of the book is me having fun, but me having fun (or so I’d like to think) is less for the sake of shock or even irony than lyric hyperbole. Some elements are exaggerated for the sake of play—but the exaggeration is sincere. For instance, one could also look to “the cis boyes waring jim shortes & tragick shaydes.” I thought, yes, the line was playful and funny, but also I found a usefulness to imagining what ‘signing on’ to the description, as a reader, did. The lyric leap begs the question what is tragic about cis boys in gym shorts and sunglasses (among other possible reads: shades as pastoral umbrage, Jim as proper name, wearing as warring, and so on)? It invites into a space to re-imagine relation. The reader is confronted not with the like of simile but the openness, the how, of hyperbole, metonymy, appositives, apostrophe, and so on. Likewise here too with the ass and the chair. There is a usefulness to reimagining the basic assumed forms of things. One sees a sunset that looks like an Etel Adnan or Alma Thomas painting and encounters something—an arrangement of color, a relation—which wouldn’t have been possible otherwise. That poem in particular, at least for me, is invested in rearranging identity into another terminology (spatial, acoustical, phenomenological) not as corrective but to bring the current terms, their contingency and formal compositional elements, into relief.

BM: How does writing in a neo-Middle English style affect your process of writing? Is it more freeing or more constricting?

JC: It’s both. It’s a space with limits—which felt, yes, at times like law, but also allowed an unwinding, an accrual process which ushered me along beside it. I found things just by play that otherwise, I don’t think, would have occurred to me to write. As an example, I don’t think I would have paired moth and mouth together in a poem, but I found myself spelling each the same, leading to an interplay of objects dictated language-out rather than intention-forward. Suddenly the moths outside my apartment seemed like mouths; placing estrogen under my tongue felt like blooming. Or, expression had very little to do with it—it was construction, composition, through and through. Adjacency and association outdid any metaphorics of self. Likewise, however, some things I thought the book needed it turned out not to be able to sustain at all. There’s one love poem in the book but intimate address, something I’m fond of, felt by-and-large incorrect throughout. I felt that as a constant restriction. I will say, though I liked how clear the project was as it allowed me a clear beginning and ending. The book was done when the language and I were done with each other.

BM: As a child, did you ever see yourself writing the next best Middle English collection of poetry? How does this style of writing augment the trans-voice and experience that you want to represent?

JC: To the first part, I remember, distinctly, picking up Tolkien’s translation of Sir Gawain and the Green Knight at age 11 or so, in an evangelical Christian library, hoping for more hobbit holes and romance, and being shocked by the content, spellings, violence, and, seeing the Middle English alongside the translation, the thought of translating English-to-English. I found myself utterly lost—but lost completely on my own terms. That lostness, that loss, is in feeld for me—and in its way that moment was foundational. But the direct answer is no, I did not see myself writing feeld or writing anything for that matter (like many who know they’re trans from a young age, or for those whom that word encountered later, much later, seemed to fulfill something, or indicate something even as it failed to speak it, and especially for those who grew up in an ‘unaccepting’ household or community—which at times seems to be, to differing extents, all households and communities—I did not see myself as making it past childhood).

As to the second part, I think representation (of self, of community, of a word) is ought not to be a goal in-and-of-itself; it’s rather an inevitability to be aware of, to navigate. I certainly don’t want ‘my voice’—which is not the voice of feeld per se—coming to stand-in for trans people as such. While my life has had many of the tragedies one would expect of a trans woman, I certainly have had a much more comfortable life than many, and, at best, I can only attest and gesture toward what I know I am not the target of, but merely a first-hand informant to, through direct experience, friendship, testament, occasional damages. As an example, any time I’ve been stopped by a cop presuming me to be engaged in sex work, I had the luxury of, at the time, not being engaged in sex work. It’s a violence; it is scary—but I am definitively not the intended target. I am collateral. I have my citizenship, my ability, my speech, my whiteness. Such moments, I think, are not ‘for me’ to position myself as representative of as a ‘victim’ despite being a violence that is a part of day-to-day life. That said, I can attest, and I want to be aware that, even now, a reader may be presuming any number of things about my person, utilizing it as a holding place for others. I know that a reader is as likely to wonder about my body as a passer-by on the street. So one negotiates how one is represented in a field dominated by the epistemology of representation, understanding, knowledge—but, no, it is no goal. The resistances representation allows are, I believe, at their best, strategies to survive the very violences representation creates.

BM: The appeal of feeld to me is that, despite the word-play and olde tyme stylistics, I always find myself understanding something thematically integral through the last few lines of the poem. In poem III., you finish off a rhythmically fast poem with a cool and collected ten words: “this is the corse/ a tran / a feeld/      a corpse.” How important is it in your writing to achieve a resounding conclusion and how much of the theme of your poem do you want to portray through your conclusions?

JC: I don’t know what makes a poem, but for me as a reader, I know I expect closure—maybe narrative closure, maybe stability, maybe cohesion. I feel the poem promises, or it needn’t, but it has been made to feel as if it promises, this. I think you’re very much right in noticing I gravitate toward engaging that promise of closure. Sometimes it comes, sometimes it doesn’t—like in life. After all, if the default form of narrative is stability/action/return-to-stability, how does one talk about any trans experience, where the beginning and end are often as unstable, and at times more so, then the ‘transition’ between them? So one finds other means to close up things, ways to leave things, wounds, open, unbelievable attempts at suturing, arrivals and departures. At times this is a theme, but at others it is a turn away from any ‘theme’ within what precedes it. For instance, “boyes r not alowd in this poem” as an end line, I believe, does not consolidate a theme as much as prohibit a certain consolidation, or open onto another consolidation by prohibition. Also, though, I think it’s really quite simple as me wanting to see that line close a poem.

BM: Appearing many times throughout your book is the number 2. Why is 2 a significant feature of the “feeld”?

JC: The easy answer I’m aware of is something like ‘binarism’—or that’s what I feel one expects to hear. For me, though, it’s largely the effect of it—one is reminded one is in a made up space, a composed space, one having passed through text messaging, the internet. As much as one is shown an elsewhere, I wanted it to lead one back to here, how here is an elsewhere, how things very simply could be other than they are.

BM: Ambiguity is a component to your delivery in Feeld. Soundplay and textual ambiguities remind the reader of the double entendres and innuendos of Shakespeare. What does the employment of ambiguous wordplay achieve for the overall message of your poems? Is there a mocking quality to the ambiguity that speaks out against the concept of binaries?

JC: I hope it’s not mocking—or not merely or primarily so. I would like to think feeld is very clear in its composition even if it’s not ‘transparent’ in signification or meaning. I think poems can be, certainly, clear in meaning. Anecdotal poems are common enough and, to my taste at least, often very wonderful. But there is a use too to withholding immediate or clear meaning. The commitment to violence, for instance, people have rarely follows signifying logic. Violence oppresses communities but, too, creates and coheres them. Anytime I’ve been harassed in a bathroom, let’s say, I know it is less out of hatred toward me as a thing in the world as a desire to keep that space, a space a cis woman feels is hers, as hers alone. The space needs her and she the space. The expulsion of a trans woman from the bathroom makes it pure again, makes the woman pure as a woman again, makes the ‘public’ of the public restroom back into a public—a shared essence—again. Which I say to say I believe people are in love with form—that ‘their’ space remain formally cohesive and pure—more than meaning or logic. Rearranging these forms, showing their contingency, showing the desire which undergirds the professed logic, is something I find poetry especially situated to address. It’s certainly not the only medium though, and, of course, poetry too can certainly do other things. I would like to think these rearrangements indicate not only, precisely, the constituent parts of a formal system of organization, i.e. the bathroom, but also gesture towards their other possibilities. At its best, I believe, this can show this urgency we’ve made—the urgency we’ve become.

Jos Charles reads with Taneum Bambrick on Thursday, Sept. 26, at the University of Central Missouri’s Elliot Student Union in Room 237B at 3:30pm as part of the Pleiades Visiting Writers Series.