AN INTERVIEW WITH COREY VAN LANDINGHAM

Zach Smith, a student in the creative writing program at the University of Central Missouri and an editorial intern for Pleiades: Literature in Context, interviews Corey Van Landingham, whose poem “Recessional” appears in the Summer 2019 edition of Pleiades. 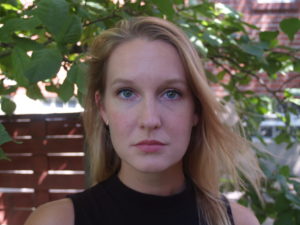 Corey Van Landingham is the author of Antidote, winner of the Ohio State University Press/The Journal Award in Poetry, and Love Letter to Who Owns the Heavens, forthcoming from Tupelo Press. A recipient of a National Endowment for the Arts Fellowship and a Wallace Stegner Fellowship from Stanford University, her poems have appeared in Best American Poetry, Georgia Review, Kenyon Review, and The New Yorker. She teaches in the MFA program at the University of Illinois Urbana-Champaign.

ZS: In your poem “Recessional,” in the upcoming issue of Pleiades, you create a beautiful image of a wedding with a shocking twist. How did you find a way to write about difficult subjects while respectfully acknowledging the gravity of your topic?

CL: It’s a terribly difficult challenge, and a risk I’m constantly aware of, especially when writing a poem like this one that uses extreme juxtaposition (a glamorous wedding here vs. the violence there) for dramatic effect, irony. The question that “Recessional” poses—“What love poem / could be written when men can no longer / look up?”—is one that the poem won’t, and can’t, answer. But to me, that kind of self-awareness is necessary when considering that issue you mention of addressing difficult topics respectfully.

Poetry is, for me, ultimately a form of proximity. It both acknowledges and closes distances. At the same time, while they seek to bridge a distance between lover and beloved, writer and reader, while they create a sense of intimacy, love poems rely on aesthetic distance to fashion these illusions. And if distance is what allows for love, and beauty, and poetry, then it too allows—as drone strikes remind us—the objectification of the other. The “you” in a love poem is always more and less than reality. So, too, the body on a screen. It is this remove—the anaesthetizing and dehumanizing distance from the drone to its target—that I find utterly terrifying. I am trying, then, to write poems that call attention to distance in its many forms, to write about love in a way that makes the body concrete, unavoidable, dangerous.

If anything, poetry and its role in the age of the drone have become even murkier, even more unsettled. The safe distance from my desk, or from a wedding where one doesn’t fear for one’s own life, to these issues—the militarization of the drone, the idea of targeted killing, that the president signs for every drone strike—is, of course, not the same as the distance from the drone (or the drone operator) to its target. But the intellectual and imaginative work of parsing these distances and discrepancies, these multiple forms of control and privilege, is one of the ways that poetry can pay productive attention to this form of warfare without thinking that it could offer some easy answer.

ZS: In the contributor notes for your poem “Recessional,” you mention that you teach in the MFA program at the University of Illinois at Urbana-Champaign. Does your experience as a teacher influence your approach to writing?

CL: Absolutely. Especially at the graduate level, so much of my job is about sustained attention, about listening. One skill I try to instill in my students is the ability to transcend taste—to approach work on its own merits. It isn’t something I’ve perfected, of course, but it asks one to set aside one’s own ego, one’s own ear and eye for that of another, to learn from their vision, their music. When I come back to my own writing, then, I think about what kind of attention I’m asking from a reader—how a poem might earn and reward another’s time. And honing my own attention—to a student’s work, to their way of viewing and fashioning the world—is a practice that seems a perfect pairing for poetry. My students also constantly remind me of the courage it takes to devote yourself to language.

ZS: As a Ph.D. candidate at the University of Cincinnati, what advice do you have for upcoming graduates? What made you decide to continue your education in Creative Writing?

CL: As far as advice: keep reading poetry, find poets whose work you admire, learn from them, write to them. While almost all you do in a Ph.D. program is read, it’s easy to get bogged down in texts that you should read. This isn’t to say you shouldn’t read those—just also reserve energy for art. Education should be demanding, but it shouldn’t dissolve your enthusiasm for art.

One answer to why I continued to study Creative Writing is because I constantly feel that there’s worlds upon worlds I’ll never know—I always have so much more to learn, to read. And I feel as though I owe it to my students, to be prepared to guide them, as much as I can, in the field.

But the other answer is the academic job market—if I would have gotten a job without my Ph.D., I probably wouldn’t have pursued one. It’s so very close to impossible to obtain the kinds of jobs that one may have hoped for in the past. Which leads me to my other advice for graduates—if you don’t love teaching, if you can imagine yourself doing anything else, don’t chase down the world of academia. Even with the lack of good jobs in Creative Writing, Ph.D. programs can still seem to funnel everyone toward that future, of being a professor. For me, teaching comes before everything else—I can’t imagine a life without it. But it’s not a failure, it’s not ignoble, in any way, to pursue another path. It might be the smartest thing one can do, to figure out how else to make a life that allows for art and an income.

ZS: Your essay “Something to Talk About: A Case for Negative Poetry Reviews,” discusses social media a few times. What do you believe is the best way to utilize social media as a positive force for a writer’s career rather than a negative force?

CL: That’s a great question. I think genuine humility and generosity, contributing to a sense of community instead of only asking from it, are important. As writers, it’s so easy, so tempting, to use social media as a barometer for the worth of our work. How many people share or retweet our poems. How many people say they’ll attend our reading. And often these don’t translate to the actual reading of poetry, the actual formation of community. I’ve had to take a step back, try not to so quickly turn to others for a sense of value.

Of course, the ability to connect with writers and readers from around the world is a wonderful aspect of social media. Making those connections meaningful—true admiration, real attention—that seems a positive force.

ZS: A good number of your poems focus on weddings. What is it about weddings that draws your attention, and do you have any other recurring subjects in your poetry?

CL: Weddings merge two of the Great Subjects of poetry—love and death. While part of them helps to envision and forge a life together, merge two lives, they also serve as a significant memento mori—Until death do us part. Their loaded traditions, myths, expectations are such good poetic material! And I write about spectacle in many iterations, from weddings to parades to baseball games. More and more I’ve been writing about sporting events. There’s a pull to this kind of pageantry, to distances between watching and watched, to the fine-tuned machinations to fulfill genre, the crowd’s desire. They invite panoramic, dynamic attention, and they’re full of devotion to origin, to place.

ZS: As poetry is both a verbal and written form of literature, how much emphasis do you believe should put on the sound of words when writing poetry?

CL: I think that changes for each poem, and each poet. I have some poems that I hate to read out loud—sometimes there are certain visual puns, or just elaborate syntactical movements, that are dreadful to present in my own voice. But they reserve energy on the page, demand more silence and space. Some gain a new life off of the page—ones that are punchy, invigorated by a specific inflection only possible read out loud. In general, though, through multiple drafts, I try to bring both ear and eye to a poem. The question-dodging answer is that each poem and occasion creates its own balance, or lack thereof.

While one isn’t really supposed to say so, I secretly despise reading my own work out loud. It never sounds the same, that translation from voice-in-my-head to voice-for-others. I’m always reminded of the tape recorder I got in middle school, and how I quickly learned that how I sang while singing along to the radio was drastically, terribly different than how it really sounded.

ZS: Who are you reading right now?

CL: At the beginning of my summers, I always quickly switch to reading prose, as I find that during the school year I often don’t have time to devote to novels. But my choices are fairly random—I just read The House of Sand and Fog by Andre Dubus III, am almost finished with Woolf’s To the Lighthouse, and about to begin Chip Cheek’s Cape May. To prepare for a month-long residency in Gettysburg, I’ve been returning to art historian Kirk Savage, who writes marvelously about the art of the Civil War and its monuments.

As far as poetry goes, I’m in the depths of syllabus-building, so a unit on elegy has me returning to Diana Khoi Nguyen’s brilliant Ghost Of, Alice Oswald’s Memorial, and Ed Hirsch’s Gabriel. And, along these lines, I’ve had Anne Sexton’s “The Truth the Dead Know” pulled up on my browser for the past week, and have been returning to it multiple times each day.

CL: To return to the wedding-obsession, I’m working on a manuscript of poems circulating around that famous-to-the-point-of-cliché line near the end of Jane Eyre: “Reader, I married him.” In 1854, just a matter of months after Charlotte Brontë married and less than a year before her death, she wrote to her friend Ellen Nussey on returning home from her honeymoon: “It is a solemn and strange and perilous thing for a woman to become a wife.” Her letters displayed both hesitancy and joy over her new station. The majority of these poems take up this very ambivalence. Countering the ideals of new marriage, I am working with a transgressive, contemporary speaker who both courts and eschews these myths. There’s a prismatic effect to marriage—there’s the self you always thought you would be, the self that has to exist peacefully with another self, the self you want to be, the self you see, and the self you see in another’s eyes. These poems attempt to explore such a prism.

Zach Smith is a student in the creative writing program at the University of Central Missouri, an editorial intern for Pleiades: Literature in Context, and poetry editor of Arcade.