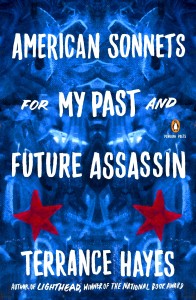 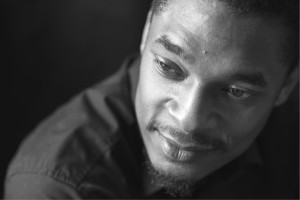 (1) If this book were a dish, it’d be one from the Cajun cookbook, because “all my encounters,” says the poet, “Are existential jambalaya.” And to wash it down? A glass of punch, the colder the better. Each of these poems is titled “American Sonnets for My Past and Future Assassin,” and one of them reads in its entirety:

See what I mean? No need to reach for the Tabasco bottle. Mr. Hayes’ cooking is plenty hot already.

(2) If this book were a record, it’d be an old-school mashup: the Beastie Boys sung by Public Enemy, say.

(3) If this book were a good cause, it’d be Goodwill. Because the world stinks. Because

Even the most kindhearted white woman,
Dragging herself through traffic with her nails
On the wheel & her head in a chamber of black
Modern American music may begin, almost
Carelessly, to breathe n-words.

Sometimes the father almost sees looking
At the son, how handsome he’d be if half
His own face was made of the woman he loved.
He almost sees in his boy’s face, an openness
Like a wound before it scars, who he was
Long before his name was lost, the trail
To his future on earth long before he arrived.
To be dead & alive at the same time.
A son finds his father handsome because
The son can almost see how he might
Become superb as the scar above a wound.
And because the son can see who he was
Long before he had a name, the trace of
His future on earth long before he arrived.

David Kirby’s collection The House on Boulevard St.: New and Selected Poems was a finalist for the National Book Award in 2007. Kirby is the author of Little Richard: The Birth of Rock ‘n’ Roll, which the Times Literary Supplement of London called “a hymn of praise to the emancipatory power of nonsense.” Kirby’s honors include fellowships from the National Endowment of the Arts and the Guggenheim Foundation. His latest poetry collection is Get Up, Please. Follow him @Kirb23.